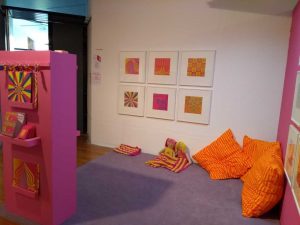 Artists working with colour dominate the exhibits in Studio Three. Entering the exhibition space, you’d be confronted by an array of bright colours. Laura May uses hot pink and yellow in her op-art prints and childrens’ workbooks and toys. She has arranged her show to resemble a nursery play area, with brightly coloured rag dolls, cushions and knitted blankets on the floor. Daryl Cooney uses a mixture of primary and pastel colours in his bold abstract paintings and sculpture. Graphic shapes are painted with crisp delineation, and in places, the collage overlay is placed across the flat plain of colour. 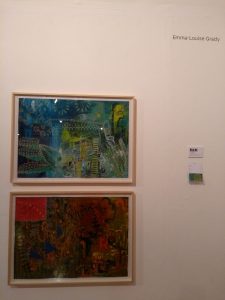 In contrast, Emma-Louise Grady creates dense patterns of colour in her oil and acrylic paintings, reminiscent of Australian Aboriginal Art. Using a palette of intense blues and greens, her work conjures worlds within worlds and has been selected to exhibit at the RSA New Contemporaries exhibition in 2020. Another artist working with vibrant colour is Hannah Crooks, who was inspired by a period of voluntary work at a girls’ refuge in Kenya to create large format photographs of flowers, mounted on light boxes. The flowers represent the girls in the refuge, escaping from FGM or child marriage.

In contrast, Susan Mitchell’s exhibit, ‘Nine Objects, Nine Stories, is a conceptual arrangement of found objects, each with a story that links its owner to a particular set of memories and emotions. The objects are displayed on plinths or shelves, stories typed alongside. 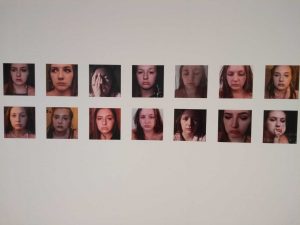 The five women artists in gallery reflect on the female self. Ella Warner perhaps has the easiest relationship with herself, focusing as she does on the inspiration she derives from nature, and in particular, with plants. Her show features a collection of vases holding a selection of dried flowers and seed pods. Zoe Cook’s work, by contrast, takes the form of a written and photographic diary of her depressive illness, in a series of large format colour self-portraits taken when the artist was suffering extreme bouts of emotional pain. It is a brave piece of work and it is hoped to have proven cathartic for the sufferer. 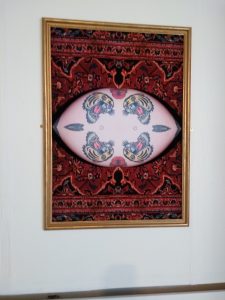 Robyn Goodwin also deals in self-portraiture, presenting monochrome arrays of the artist in conversation with friends and family. A video installation is a film version of the photographic stills on display. Plinths in a row opposite show transcripts of each conversation and a flip book of the individual photos belonging to that conversation. Cloud Tanadynska’s work is influenced by ecclesiastical imagery. Her paintings depict abstracted human forms on a background of Persian rug designs, in ornate gold frames. A large installation takes up a corner of this show, with three eye-level round cut outs, featuring film footage of sexual activity interspersed with church imagery. Lynn Hammond’s work is another study of nature, but her colour photographs show the often destructive effect of human interventions on nature. Her hilltops are defaced by TV masts, electric pylons or barred from access by gates and signage. Offering a respite from the decay of industrialisation, a series of amorphous transparent assemblages are suspended from the ceiling, cloud-like in form. 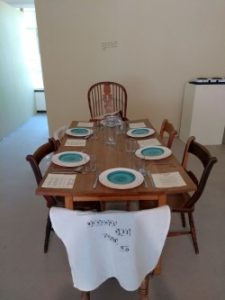 This studio space invites you to a sit down meal. ‘Easy as Pie’ is the work of Louise Dickson, who has created a real-life dining experience as her show. Viewers are invited to join in a meal shared by the artist and her friends. The work is inspired by her grandmother’s recipes and motivated by nurture.

Moving along Reka Barcza’s paintings are depictions of a mythical being, a female human form with a deer’s head, arranged in traditional ‘portrait’ style, the deer goddess, clothed or naked, seated facing the viewer. A video installation fixed to a wall, shows the artist making body-art by daubing herself with paint and pressing herself against a large sheet of paper or canvas, evoking comparison with the work of Yves Klein. However, this female participant acts with more agency than Klein’s models.