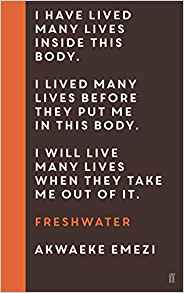 Freshwater follows the life of Ada, narrated by the gods who inhabited her at birth. What could be seen as a cluster of psychiatric disorders is depicted instead as a spiritual struggle of finding one’s way in the world, all happening in Ada’s head, in the marble room where all her selves are contained.

Akwaeke Emezi is an Igbo and Tamil writer and video artist, born and raised in Nigeria. Freshwater, an autobiographical novel, is their debut, longlisted for the Women’s Prize for Fiction and nominated for a number of other awards, including the Lambda Literary Award.

Freshwater is a peculiar novel, as surprising as it is irregular. The non-linear plot is told from multiple perspectives. At times it feels chaotic, but chaos fits well in a story about an adolescent girl wrestling with suicidal thoughts, self-harm and unstable relationships. Ada is ogbanje, which in Igbo culture means a child both coming and going; the book itself dedicated to people ‘with one foot on the other side’. She is home to brothersisters, narrating parts of the story as a collective ‘we’. Of that largely nameless cohort, two particular selves are named – Asughara and Saint Vincent. The latter, a soft male figure, represents Ada who dates women and cuts her hair short. However, Saint Vincent is not given much time in the book, as most of it is narrated by Asughara, who treats men as sexual objects, seducing them according to her desire, without acknowledging Ada’s emotions.

In the middle of it all is Ada, feeling the gods within her, talking to them, but sometimes doubting their existence. At one point, Ada visits a therapist, hoping she can be cured, but these efforts are cut short by a furious Asughara. Brothersisters are not concerned about Ada’s wellbeing, at least not in the real world. They treat her as a vessel, prioritising their own needs. Ada cuts herself to feed blood to brothersisters, meanwhile praying to Yshwa, a universal version of Jesus, who sometimes answers prayers and offers wisdom. Suspended between the world inside the marble room and reality, Ada struggles to form stable relationships with her partners and family.

Emezi’s language is evocative and striking, with some metaphors overwhelming the reader:

It was the Ada’s first winter and she made a snow angel because that’s what she’d waited for, to lie with her arms flung and her legs wide, to flap and fly until sainthood spread beneath her.

Liminal spaces are Freshwater’s central theme and Ada is constantly moving through these dualities, with every page becoming an ever more tragic character. When describing these in-between spaces, Emezi’s language truly shines:

However, Emezi’s novel is uneven. Some parts are overwritten and others underwritten, but that is not necessarily negative. It makes this story more real as one cannot expect such a troubled person to focus equally on various parts of their life; it allows the reader a fuller and more realized perspective, a book narrated by hidden desires, passion and pain. There is no regularity in any of these, just as there is no ending to them. This is where Freshwater falls short – the end chapter, supposedly offering salvation, feels detached from the rest of the book and at times cheesy. It seems as if Emezi created this wonderful whirlwind of struggle and conflicting emotions yet found stepping out of it too difficult.

Nevertheless, irregularities make Freshwater interesting for being torn is an innately human experience. Parts of the book will read better, other parts worse, but from the very first page it becomes clear that Freshwater is about more than just literary quality – it is a powerful, novel take on a coming-of-age story, a fairy tale for everybody.