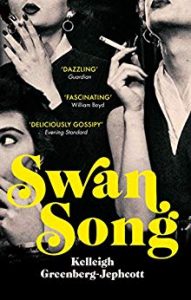 Swan Song is a historical work of fiction, and the first novel by Texan Kelleigh Greenberg-Jephcott. It re-tells the fantastic life of Truman Capote, author of Breakfast At Tiffany’s and In Cold Blood. With a playful interception on the rigidity of biography, it is written in a thrilling collective voice, an ‘our’ which weaves collective memory and documented fact in a manner that teeters just on the edge of over-ambitious.

The book’s sleek black cover adorned with silver decal and ornate font asserts its position as a ‘glamorous’ read, and the inside pages feature photographs of the real-life ‘Swans’ themselves:  Lee, C.Z., Marella, Babe, Slim and Gloria. Real woman of the 20th century American elite, each of whom were in some way, betrayed by Truman.

Despite the allure of their old-moneyed names (Vanderbilt, Kennedy, Churchill) the Swans themselves are lacklustre, save for a few scattered poignant moments such as when Truman’s favourite Swan, Babe Paley, learns of her husband’s infidelity. Here, we see Greenberg-Jephcott use her exuberance to plunge into the bourgeois-feminine psychology.

The minutia of detail throughout the book, employed seemingly only to highlight the opulence of the people within it, can become a little old. There are many descriptions of dinner-table set-ups, of oysters and fine wines, compelling me to compare the novel to HBO’s hit show Gossip Girl in the sense of being absolutely addictive yet also somewhat tedious (and also, perhaps most fittingly, the show deals with an author who exposes the elite world around him through his literature.)

Heavy-handed metaphors and extensive descriptions do run rife, but there is also a hint of Capote’s Southern charm and expression (his mother’s dead mouth described as ‘a thin, crimson flatline’ for example) that encourages the reader to pause and enjoy the playful language. These encouragements are not frequent enough however and the dizzying temporality of the book, which jumps between decades of Capote’s later life with alarming and disorientating frequency, become frustrating. One feels there is a comment seeking to be made regarding the incongruences between collective memory, subject experience and the fallibility of language, but the novel lacks cohesion and ultimately misses the mark.

However, in defence of the text, one feature that must be commended is the organic handling of the biographical detailing. Without a prior knowledge of Capote’s exciting life, it seems difficult to decipher what is fiction and what is fact – a theme that runs through the heart of this work. The vignettes of rumoured encounters and documented experiences blend together and the shifts between the two never feel obvious. The second half of the novel sees a departure from the Swans, and a more thorough investigation into Capote’s undoing and breakdown. The obsessive details of high society are replaced with oppressive details of personal breakdown and whilst I enjoyed watching the novel turn inwards and examine the psychology of its subject – after such an ostensibly lavish first-half, it felt a little scandalous. It’s hard to feel pity for any of the characters and it’s even harder to read about the mental torment of characters, real or imaginary, that you can’t empathize with.

The story is fantastic because it is true. The layers of shiny, gaudy description only seem to obstruct the fantastical reality it is trying to depict. But it did entertain. A personal hatred for the term ‘chick-lit’ leads me to propose that this is instead a ‘beachside book’ for holidaying, for when you are not necessarily looking for life-changing or thought-provoking reads but something provocative, dark and glitzy. Grounded in fact – but disturbed by fiction – the novel attempts to explain the motives of a man who lived his own life like a fiction – his nemesis, his muses, his dreams and dark desires. If you’re a fan of Old Hollywood, tabloids, and/or Truman Capote, this may be worth a read.