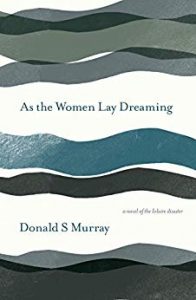 With this moving and poetic novel, full of the rhythms of Gaelic and Doric, Donald Murray has created both a memorial and a song of love, grief and lament, reflected in the windswept landscapes of the Isle of Lewis. Narrated by Alasdair Cruikshank, retired Glasgow art teacher, grandson of Tormod Morrison, a fictional survivor of an iron-hulled yacht which ran aground at the entrance to Stornoway harbour in the early hours of New Year’s Day, 1919, with the loss of two hundred Royal Naval Reserve men returning from service abroad. The Iolaire disaster is an event little-remembered beyond Lewis. As the Women Lay Dreaming moves between family memories of the 1930s and Tormod’s journals, written during his naval service in the Great War. Unopened until 1992 they describe the shipwreck that  was to decimate a generation of the island’s young men. Lewis was left with widowed mothers, orphaned children, damaged war veterans and crofts without men to work them.

Profoundly traumatic experiences which could destroy a human soul often remain buried and unspoken of, in dark recesses of the memory.  So it is with Tormod. The seventy survivors of the terrifying night of the disaster and the ill-judgment of the ship’s officers who refused to be advised by the men who knew Stornoway harbour and its dangers well, avoid contact with each other on the island, not wanting to be reminded of the past. The narrative itself follows the same path, recalling, before the story of the Iolaire is told, other great sea tragedies of the First World War – the Battle of Jutland, the sinking of the Lusitania, a thousand killed in a single flash of torpedo fire, the Falklands, Gallipoli. When Tormod’s ship was torpedoed he had found himself in adrift in a nightmare, in an ocean of oil. The smell of the grease and burning oil remain with him, recalled in the Stornoway disaster.

Tragedy and darkness run like parallel underground rivers beneath the lives of the Morrison family. Tormod ‘s character is moulded by loss – of his beloved wife, Morag, in childbirth, and of his daughter, Maraid, in service in Glasgow, of pneumonia. His second wife, the devout Catriona, he calls the “replacement”.  Alasdair and his sister Rachel lose their mother and George Cruikshank, their feckless, grieving father, sends them alone from Glasgow to Lewis, to be brought up by a reluctant grandfather and step-grandmother, far from the city of their birth. Rachel remains mute throughout her time in Lewis, traumatised by her mother’s death. Tormod’s sister Christina ends her days in a psychiatric hospital on the mainland. As a young man he had plans to leave the crofting life. Like many ex-servicemen on the island he had seen more of the outside world and longed to be done with the harsh, filthy work of the croft. He had discovered his gift for drawing and dreamed of making a living from his art, his hands free of ingrained dirt. His journals are filled with sketches of his life.  But his brother Calum’s paralysis, the result of a mystery illness, forces him to take over the work of the smithy.

Tormod’s island life goes on – he grows to love his grandchildren and they to love him and Catriona. When George calls them to live with him in Aberdeen, Rachel flees in desperation to a secret place on the island. Their grandfather knows he will not see them again.