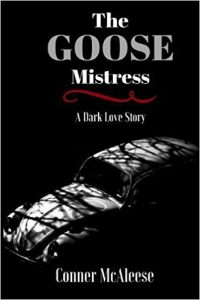 The Goose Mistress: A Dark Love Story is Conner McAleese’s debut novel. He lives in Dundee and studied History, and Writing Practice and Study at the University of Dundee.

Eva Braun is a historical figure – you either know who she was or you have never heard of her. It was the same during her lifetime. She was close to the centre of power in the Third Reich, but at the time not many people knew of her existence. And those who did know knew exactly who and what she was: Hitler’s mistress. She worked in a photo studio, where she met and fell for him. More than once she tried to take her own life, before she got what she wanted: him. She secretly became his mistress and moved to the Berghof. This was where they spent their time, before they committed suicide together in Berlin. Not much is known about her, but historians are curious to find out more about who Eva Braun was. This novel, written in the first person from Eva Braun’s point of view, is a mix of historical facts and fiction. This is not a book that I would usually read. Having been forced to read countless works about WWII in school, I usually avoid them these days. But there is something about this novel that makes it hard to put down once you have started reading it.

The mysterious aura of the book starts with its cover: a pitch-black background and a grey car half hidden in shadows, which is reminiscent of the fences around the concentration camps and tells us the same as the title: this is a dark story. The only colour on the cover, a red curved line, reminds me of blood and indicates that things will not end well. The book begins in the year 1939; the war has already started and Eva Braun is not very happy. She is Hitler’s mistress, but feels neglected by him. He spends most of his time with politics, war strategies, and his men. She is teased by her sister and mocked by the wives of the men who belong to Hitler’s inner circle. Hitler is only married to his Reich and, therefore, her relationship is hidden from the world outside the Berghof.

The novel is filled with dialogue and Eva’s inner thoughts, so the reader quickly realizes that she is not a psychologically stable person. Some of her inner thoughts seem random and rather violent. Often short-tempered, sometimes impulsive and cruel, but forever devoted to him, she follows him to the end. The timeline of the book is easy to follow, because the titles of each chapter say where and when each takes place.

What might trouble someone who knows German or is a native German speaker like me, are inconsistencies with some German words. The English Munich is changed to Münich. The city’s actual German name is München. Using the city’s English name in combination with the umlaut makes the city’s name something in-between. The German word for Miss, is translated correctly to Fraulein, but actually misses the two dots above the a. Every other German word and names of places and people are spelled correctly, making these only two minor mistakes in the book.

All in all, from beginning to end, this novel is thrilling, fascinating, and captivating. It does not try to excuse any of the terrible things that had happened. It just tries to make sense of who this Eva Braun could have been and why she was so devoted to Hitler.