Are all repeated acts what make me who I am?

It seems so, with the changes I make just being added to the list.

Even if I scratch one off, there are always more to add.

Is all that really me?

Humming songs from school and church
lyrics waxwork in my head
Absent glow of the harmonies to Christmas songs.
The use of secular and confusion over comprehensive
a partridge in a pear tree
and these three kings.

All of this is somehow me

The dragon’s hoard of crockery

Are these actions? They are to me.

Twist a leg underneath
lean half on and half off
the chair gives an uneasy spin.
Back forth back forth.
Single candle flickers. White orchid –
funerary.

So small a detail, but still

Am I growing or shrinking now?

I’m moving, aren’t I? But changing?

Leave the blinds up by half.
Let the streetlight and dawn half in. Lie half out of bed, stare at the door.
Think of the clothes you should wear or not.
Do you need your shoes today?
Are they in the living room?

That’s rather better isn’t it?

I used to sing everyday

More interest, am I bored?

Rock rock, aching aching
panicked without fear, just the constant sway
back forth back forth.
Or is it?
Sat down by Mum and watched turn pale
the waves are moving, rock rock, sway.

Am I forgetful? Absentminded?

A mistake really, I never make time to put it on

Not all repeated acts are positive

Take the nameless girl as yours
Do you believe her? 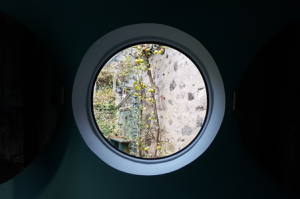 Enter the chambers
of a multicoated
labyrinth. Cubicles and keys
and stairwell scaffold
ascending
descending to vestibules
to subtropic warmth
beyond doors.

Return, come away
back through to the open
into the high-pitched whistle
a distant overhead call.
Sit, drink, ignore or listen
the echo of coffee cups
spoken softly just so.

Downstairs bathroom:
eggshell blue, curl-footed tub
sat upright below the window
where a ship lies in wait
with the sponges on the deck
caught on shells.

The four-poster tucked
behind the stairs,
its sash faded, tassels short.
A pale blind rocking horse
waits by the window watching
the freckled curtain film.

Into the master bedroom:
floorboards cry beneath the rug
stacked books, loveseat
a crocheted bedcover
books that dream of a bookcase.

The little Dutch girl in her hat
all white – sits on the sill
with a ghost of
a smile.

Imp of the Perverse

[Considering Poe’s Imp of the Perverse]

You must tell, you must! Even as you know you must not, you run down the street and tell every soul of the poisoned candle, the villainous wick and all you did to get away with it.

The imp crawls around the corners of your mind, picks up guilt and shame until it becomes pride. It sits by your spine and pulls the cord to play the act just right, ‘til the knife hits your gut, splits the skin and the sack of each organ. Your intestine finally makes it outside.

You don’t try to put it all back, or pick it up and hide it, get it back inside. Instead you run down lanes to the busiest thoroughfare, dripping viscera until you can tie your own noose with metres of gut.

Is Poe’s narrator overcome with the urge to share his crime, the howdunnit of the whodunnit?

He only wants to share it because of its success. If he had been caught, he wouldn’t have said a word, if he had failed he would have remained quiet and tried again, but because he succeeded, the murderer couldn’t help but declare that success. Or maybe he needed to share the genius of that success.

His greatest achievement would remain a secret; you cannot pass on the glory of a success you are ashamed of. So, is that the imp? The swell of pride over shame, when your self-aggrandisement becomes stronger than the fear of the consequences.

What is an imp?

How does it talk?

Does it sit
by neurotransmitters
and poke them into life
when you dream?

Being and Non-Being, with love to Virginia

I know they occurred, the train journeys, scenes from windows in summer and the un-scene of winter, the stream of music issuing from my rapidly dying phone. The only blurred polaroid of those journeys is the slow track into Newcastle, the light of sunset or the jaundice of streetlights against the spire of St Nicholas’ Cathedral.

Woolf – why is it that calling her Virginia is too familiar? – writes on the ‘un-being’ of childhood, the trips to parks and swimming lessons wash under the flow of spilled coffee. They do not stick.

Summer after summer holidaying outside Rennes in that cottage is cut down to only two memories: 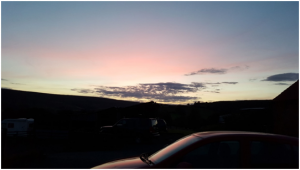 How many months was I at university before I referred to Dundee as “home”? And what did I mean when I said it?

University takes up one of the most formative stages in my life, the first independence, a place with only one string.

The place I first called home, the place I was raised and where my mother lives, the place I lived before I came here also happens to be my birthplace – now that’s a label you can’t misconstrue.

We simplify all those phrases; ‘where I grew up’, ‘where I was born’, ‘where I went to university.’  We don’t have to assume anyone’s knowledge of our lives if we use the word “hometown.”

The names we use for places are subjective in that way, Dundee means different things to different people: ‘a city on the north bank of the Tay’ as well as the city where I go to university.

That’s Dundee for me. I call it home when I’m away and I call my flat home when I’m not. By ‘away’ I mean home, the original home, the hometown.  It presents both poles of meaning: it means nothing and everything. 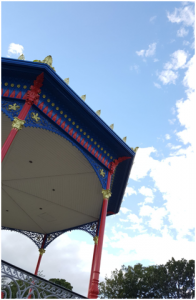 “Home” is a post-it note. You carry a pack around anywhere you go and if it meets the criteria, you slap a post-it on it. You trip and catch yourself on a wall and when you lift your hand away – there it is – post-it noted. Whether you return or not, that post-it may stay or slowly lose its adhesive, maybe it gets soaked off in the rain.

People are home too. A post-it note left in London could wind up in Denmark for large portions of the year, rather like you made that post-it into a paper airplane. But a post-it note can fall off people too, given the right season or a turn of the wind. There’s a certainty to this process; despite leaving post-it notes stuck to the bottom of shoes, you can always place more.

My sister-in-law doesn’t either.

They go home to their Father. There is no grief for those who would see their Father’s House.

You can burn all she gave and sell the empty house that seeps out the perfume she wore, the house where she lasted out her years, and smile at the absence of the space she inhabited.

Yet you cannot burn yourself, nothing can scorch the life you shared from your mind. In the early days, you can still hear her voice and turn, expectant, to find the shadow of the doorway hanging.  Teacups – how she held them, held a teaspoon, tapped the sugar off twice before setting it aside – the silk threads of a life.

There will be places you avoid for the smell of them, the lavender she kept in the bottom of drawers, the smell of burned mince on a pan left on the hob, the stained glass of a church she loved. You can never avoid them all. That’s the guilt of the bereaved. 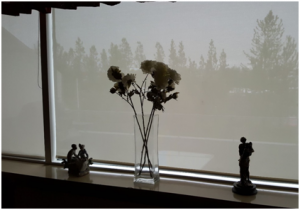 We grieve out of guilt. But what do the dead care? Funerals aren’t wholly about the deceased, they’re for the left-behind, breadcrumbs that the dead never follow home. So, we sit in strange rooms and eat and drink to dwell on life together, handing memories back and forth like postcards.

The daughter at the pulpit cries and the rest follow, their memories signifying loss, recalls the good that came before, the joy that can never come again with the one you mourn.

I don’t remember why I cried as a child, but it wasn’t because of grief. I cried for two reasons. I cried because I was confused by the permanence of death, the never coming back again, the world of the church, the plants we put on my grandmother’s coffin, the hearse, the coffin. Most of all, I cried because my mother cried.

A goodbye for the closure of a life, but it’s never enough: we want more time, less time, time spent some other way. There is rarely a perfect end.