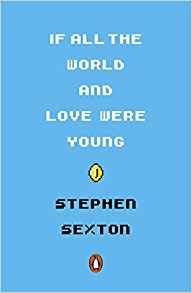 From the first moment we set foot onto ‘Yoshi’s Island’ in Stephen Sexton’s If All the World And Love Were Young, we are whisked along. There is no time to situate ourselves before we are riding on Yoshi’s back through the long-distant lands of Sexton’s childhood where he joins Mario in battling against the bosses of Super Mario World, intent on ‘rescuing his friends.’

The sections of this book are titled for Super Mario World worlds. Each poem bears the name of a level of the game. A true Mario player will find this book less daunting than I did—I could not have read it without the aid of Super Mario Wiki, as my nerdiness demanded I tease out the meaningfulness of the various worlds which make up Sexton’s childhood. There is no ‘just’ riding along.

During the game’s slow progress, we experience his mother’s garden, night sounds like the foxhunters coming with guns to the quarry, and insight into the nuggets that excite a boy’s imagination: the Mary Celeste, Ötzi the Iceman, and Arion crossing the Strait of Messina. Metaphor is everywhere.

The stanzas run with the deep sombreness of being attendant to his mother’s battle against and ultimate defeat by cancer. In one poem the hospital becomes ‘Lemmy’s Castle,’ doctors are Merlins with potions, and we get a sense of the fear and boredom of waiting by bedsides,

[…]where all the patients start to look the same they are gradually
replaced cell by corrupted cell. At bedsides of parents children
hold it together their children play games on their little handhelds
young faces lit up in the light oblivious to the passing
moments[.]

Note the copious use of enjambment and the meagre application of punctuation. Where sometimes such techniques lead to flow, in this case they seem to accentuate the poetry’s likeness to the pixilated game world. There is a quality about it of pointillism, of the world seen through code-reading eyes, as in ‘Awesome’ when he says, ‘the river ripples freezing sines all the way to Solitude Bridge[,]’ or in ‘Yoshi’s Island 2’:

That pane of glass looks onto the rest of his worlds: childhood inventions through Sexton’s adult lens. Sexton’s mother’s battle with cancer lasted six years, and so the game seems to draw out over that time.

In other poems, we have insight into Sexton’s mother’s psyche, as in ‘Valley of Bowser 3,’

It’s so short she says it’s so short it doesn’t feel like I’ve been here
At all and now I have to go. […]

These worlds of game and death, of nature and wonder at nuggets of knowledge imparted overlap and merge and bind into one. It is this binding of worlds that makes the book both hard work and an intriguing puzzle. As in every level of Mario’s world, you find yourself constantly turning and reacting to each new volley of image and ducking or dodging to fit them into a place in the world we, as readers, must build to make ‘sense’ of what we are reading. Sexton’s sometimes perfect metaphors and stunning images are Easter eggs and prizes you win by sticking with the game.

All these images grow and entwine on the framework that is Mario Super World. We are left with a complete, new trellised tunnel of a world, which is mournful, resigned, and hopeful. Toward the end, again in ‘Awesome’, Sexton realises

Dear friends I cannot rescue you anymore than I can place
her shoulders in the way of the wind but when you’re walking
in the snow
when the time comes there’s room for you in this voice because
it’s your voice.

Sexton leaves us with the knowledge we’re part of this world building and we are his friends.