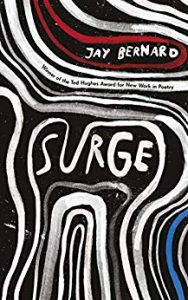 Not rivers, towers of blood.
(‘Sentence’)

In 1981, Glasgow School of Art’s Ceramics Department and its famous dances, were housed in the Haldane building, the city’s shambolic former police horse stables. This may have been a long way from New Cross Road, the tragedy, the official and media indifference in its aftermath and the lasting consequences of London’s 1981. Yet. the reggae rhythms of so many of the poems in this volume, their rallying qualities, which pulse, and pulse more with a rising and justifiably implacable anger, returns me to that dance floor of ska and protest during the Thatcher years. I suspect that resonance would not surprise the mind behind Surge.

In 2016, Jay Bernard became writer in residence at the George Padmore Institute, ‘an archive, library and research centre dedicated to radical black history in Britain’.  With a mission to investigate the ‘New Cross Massacre’, and its aftermath, Bernard soon became aware, in those days after the Brexit vote, ‘that the events of the present were eerily similar […]. Then in June 2017, Grenfell happened’, ‘the archive became, for me, a mirror of the present, a much-needed instruction manual[…]’

Bernard’s investigation takes the echoes of both fires, Windrush, and more personally, their own ‘place in Britain as a queer black person’, channelling these major themes through many forms and voices. Surge (the poet’s first full collection, after three pamphlets) in its earlier incarnation as a multimedia performance work, Surge: Side A, won the 2017 Ted Hughes Award for New Work in Poetry.

By any standards, that’s a commanding mix for 53 pages of poetry, which includes various plates. In terms of the enervating response to the recent and not-so-recent historical events, Surge works brilliantly. I’m a little less certain, however, that their exploration of the emergence of their own queer black identity and the painful nature of that identity’s shifting places in that community is so well-served. That is not to say that these poems are not profound, well-structured and stirring, but I feel there is a need for more space to develop this poignant and important theme. It may take another volume to unpack what we need to face in the sometimes false promises of intersectionality, with its myriad tripwires.

Surge has me ask various questions of the format chosen by Bernard. Clearly, the poems are the work of a strong and inspirational performer, and this book has none of the disappointing hallmarks I have sometimes traced when reading print after a remarkable spoken-word set. Too often what has been inspirational in the right medium, doesn’t sit well on the revisited page (and it’s reasonable to say that there are many poets whose work reads beautifully from a page, but who are mind-numbingly dull at a reading).  Bernard’s written work however is flexible, well able to explore forms…prose poems, traditional quatrains, a truly remarkable erasure poem (‘Ark II’), poems founded on songs, narratives, and there is fluent and wonderful language in both standard English and Jamaican voices. Those voices are numerous, perhaps most powerfully the one which issues from a dead boy in a police mortuary (‘Clearing’). So, this is not a criticism of what is here. This poses the question if a standard format book is the right place for this multi-voiced, multi-disciplinary achievement. I suspect it is insufficient, and perhaps a shadow of what the poet will deliver in a multi-media performance situation. We need to question why a book is always expected to be best and, certainly, some form of recorded legacy to take away and to revisit and revisit, would be good, because Surge deserves all that.

The Caribbean influences lifting and dancing protest across the Haldane’s rough floors in 1981, aren’t really so far away. Bernard’s Surge is a testament to courage in the face of overwhelming ruling indifference. In Johnson’s Britain, we need to add our voices now.