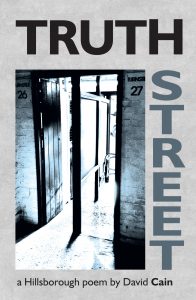 On April 15th,1989, 96 lives were lost in the infamous Hillsborough Stadium Disaster, when two pens filled with fans became fatally overcrowded during a match. Although the cause of the tragedy was originally attributed to drunkenness and football hooliganism, a second inquiry in 2016 painted a picture of negligence, incompetence and corruption. 30 years on from the disaster, David Cain’s debut book, Truth Street, transforms testimonies from the second inquiry into a harrowing piece of epic poetry.

Claiming inspiration from Charles Reznikoff and Svetlana Alexievich, Cain has chosen to construct a narrative of a terrible event by combining transcriptions of several eye-witness testimonies. This lends an authenticity to the work, documenting the words and experiences of those who saw that day at Hillsborough Stadium first hand – football spectators and police alike. It also creates a piece of oral poetry that demands to be read aloud. Indeed Truth Street was performed live in 2017 at the Utter Lutonia and Brighton Festivals:

They didn’t ask me how I were, or owt like that.
The first thing
How much had I had to drink?

By including features of natural speech, such as the confusion of tenses and the distinctly Liverpool phrase “owt”, demonstrated here in the section ‘The West Midlands Police came and took a statement’, Cain gives the speakers in his poem recognisable, believable, and thus sympathetic, voices.

Blending this naturalistic language – presumably taken verbatim from, or at least heavily inspired by, the witness testimonies – with more overtly poetic techniques is what turns the book from report to epic, ensuring the words inside will echo in the reader’s mind long after their first reading. Cain does not need to fabricate the emotional weight of the testimonies, but through careful restructuring of the language they provide he draws out and emphasises it, denying the reader any sense of detachment. Take for example the use of repetition from the same section quoted before, where a survivor recalls the questions they were asked by the police while giving a statement; the lines,

are repeated in that order four times. The cycle of lines drill into the reader the sense of being attacked,  being ‘bombarded’ by the aggressive questioning that the witness must have felt. And, of course, the references to alcohol illustrate the narrative these questioners were already plotting: that the disaster was caused by drunk hooligans. One can hear in the repetition both the pressing tones of the police and the indignation of the witness recalling the barrage of questions years later.

Cain is also selective in his placement of the ‘sections’ or testimonies. The collection as a whole is divided into ‘The Afternoon’, ‘The Evening’ and ‘After’, chronologically documenting the events of 1989, and a list of the dead titled ‘Hold your head up high’. Each new testimony is marked by a bold heading that doubles as the first line. The first testimony, ‘People were in a good mood’ ends with the line ‘A semi-final.’ Knowing the mass end of life about to occur turns the word ‘final’ sinister for the reader. The recurrence of certain phrases between ‘sections’ or testimonies placed close together also gives particular words a special significance. Both the first and third testimony include the phrase ‘going into the ground’, a line here carrying the double meaning of entering the stadium but also of entering a grave.

By experimenting with the structure but not the truth of the testimonies – a vital choice in a case where the truth was obstructed for so long – Cain is able to make immediate to the reader the panic, sorrow and fury of all those who witnessed the Hillsborough Stadium Disaster. This detailed, subtle handling results in a raw and painful work that demands to be heard.