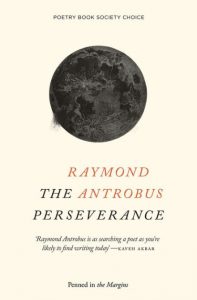 Raymond Antrobus has chosen the epigraph for his first collection wisely: ‘There is no telling what language is inside the body’ (Robin Coste Lewis). Antrobus explores his experiences with late-diagnosed Deafness, mixed heritage experience (Antrobus is Jamacian British), and an alcoholic parent; but beneath these concerns is ultimately his passion for communication. There’s something that poetry epitomises which is beyond sound and word. There is a sense of both Antrobus’s frustration with, and praise of language, in its many forms. Silence is a sanctuary from the ‘Babylon’s babbling echoes’ of his grandfather’s sermons (‘Echo V’). Antrobus asks

What language
would we speak
without ears?

The five part introductory poem ‘Echo’ isn’t partitioned with Roman numerals as typed here, but with pictorial representations of the numbers in sign language. As a reader unfamiliar with sign language, I felt my ignorance exposed and my interest awakened, as Antrobus’s poetry flourishes on the page.  ‘Sign has no future or past; it is a present language.’ he explains in ‘Two Guns in the Sky for Daniel Harris’, one of the most moving poems in the collection, in which the sign for alive and the devastating shooting of a Deaf motorist in North Carolina in 2016 coincide. Another four-part sequence, ‘Dear Hearing World’, berates both culture and individuals who, in their unthinking bias towards sound, have crushed potential,

Antrobus exposes our prejudices and does something about it –

Deaf voices go missing like sound in space
and I have left earth to find them.
(‘Dear Hearing World’)

He finds, amongst others, Laura Bridgman (a Deaf/Blind student whom Charles Dickens wrote about), Helen Keller (American activist and advocate), Jesula Gelin, Vanessa Previl and Monique Vincent (murdered in Haiti in 2016 for using sign language), Mable Gardiner Hubbards (who married Alexander Graham Bell), and Samantha, a Deaf Jamaican woman who moved to London in the 1980s.

The Perseverance takes its title from a pub on Broadway Market, where Antrobus’s father used to drink, and from a fine sestina structured around the end-words: perseverance, minute, before, father, disappear, laughter. With the shuffling of these words, time is also shuffled, rendered irrelevant, or terribly relevant, but nevertheless an artefact. In the final tercet, before is carefully placed;

I still hear popping in for a minute, see him disappear.
We lose our fathers before we know it.
I am still outside THE PERSERVERANCE, listening for the laughter.

The phrase ‘listening for the laughter’ has power and nuance. Is there laughter, or not? Can Antrobus hear it? Is he listening for the ghostly laughter of the past? Is he ready to join in the bodily laughter that comes from joy? Is it ‘mirth [that] can laugh and talk, but cannot sing’ (James Thompson, quoted at the start of ‘Sound Machine’)? Both joy and grief are integral to this collection. A wild patience keeps Antrobus waiting outside The Perseverance, and the results are joyful, hospitable, generous and forgiving. He perhaps has even forgiven Ted Hughes, having blocked out the text of ‘Deaf School’ in a cathartic statement (‘Deaf School  by Ted Hughes’), having written ‘After Reading ‘Deaf School’ by the Mississippi River’ (‘No one calls the river unaware or simple pools;’) and having won the 2018 Ted Hughes Award. Ultimately, Antrobus transcends his subject matter and the hearing world with engaging wisdom:

There is such a thing as a key confidently cut
that accepts the locks it doesn’t fit.
Call it a boy busking on the canal path singing
to no one but the bridges
and the black water under them.
(‘I Want the Confidence of’)