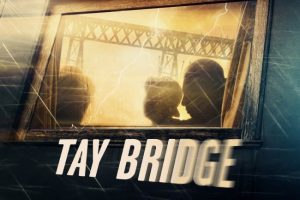 Can a play about an historic tragedy entertain?  Hearing great praise for Tay Bridge, I was intrigued to find out, and take pleasure in reporting that Dundee Repertory Theatre has managed to deliver. Despite being the first ‘in-house’ production I’ve seen at the Rep, previous shows had already set a high bar– and this play followed suit.

The eighty minute play, written by award-winning Peter Arnott (The Breathing House and Why Do You Stand There in the Rain?), from an idea by Tom McGovern, tracks the sensitively imagined stories of seven of the 59 passengers and crew who lost their lives on the evening of 28 December 1879 when the Tay Rail Bridge suffered catastrophic failure, and the train crossing it plunged into the raging Tay. During the course of the play, Arnott engages the audience to feel concern and sympathy for the passengers. Opening with a series of short monologues from each actor defining the character’s concerns, Tay Bridge unfolds to tell the back stories of how they came to be on that fateful train, deepening our connection with them. 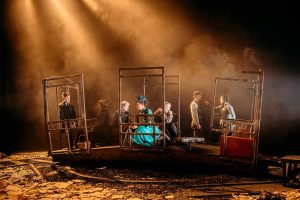 The stage is set with a single large platform slightly angled down from its high point in the centre and inset with low flat pedestals/seats, representing rail carriage, schoolroom, pub, grand house, tenement, and the doomed train. The platform also revolves with hinged lattice panels that are dropped and lowered according to which scene it portrays. The ensemble hang props on the panels throughout the play to evoke each scene. A scatter of detritus at the edge of the platform’s turn radius, resembling any railway siding, allows for props to be dropped and ‘disappear’ during the play, then recovered when needed.

Lighting is both lovely and foreboding. Clouds, mist, rain, and even the bottom of the river are beautifully conveyed. The strobe lighting we are warned about at the start of the play is more a single intense flash between eerily lit scenes portraying the carriage’s tumble from the bridge on that fateful night.

The characters, based on storied victims of the disaster, come alive under the direction of Andrew Panton and his talented Creative Team. Every performance is undertaken with flair and freshness. Actors portray main and secondary roles, as well as chorus roles . One of the exceptional portrayals belongs to Anne Kidd, as Annie Cruikshank, for turning the fully made-up face of her septuagenarian character into that of a twelve-year-old lass. Barrie Hunter, as a triumvirate of villainous men, each holding dark power over those they touch, is deeply disturbing. Emily Winter, as Emily, gives a lovely, tuneful, and moving performance.  The actors’ chorus work, whether while being schoolchildren reciting lessons, hardened pub-goers, or big-house staff, is also notable.

The end result is an overwhelming sense of loss — of real people to the torrent of the river. While the play highlights social circumstances of the age — wealthy tenement owners living off the misery they keep their tenants in, for example, or children sold by their parents into service — the deaths portrayed in Tay Bridge resonate beyond the story of a train disaster. They remind us of the hopes, fears, risks, and loves each of us lives with that might be slashed by chance. Through these individuals’ stories, question arise that are relevant to our present times: the role the Military, for example, in the unstable behaviour of one retired soldier and his sadistic, undefined actions; if we should benefit from the misfortunes of others, whether in a Victorian slum or in appalling working conditions around the world.

While Tay Bridge might present a sombre evening, it is one filled with camaraderie and tenderness. Even within the tragedy, there is much to celebrate. You won’t be disappointed.