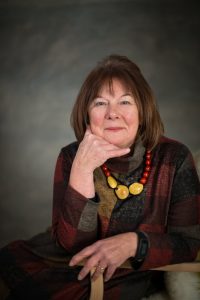 Sunshine streams in through the huge windows of Perth Concert Hall where Clare Hunter and I meet to talk about her book, Threads of Life, a History of the World through the Eye of a Needle. Recently published, this is a history of the social impact and political meaning of textiles.

Armed with coffee and scones we choose a table away from the throng of the café. We agree to sit in the sun, a warming contrast to the bite of the chill wind outside. Having both had a long drive from opposite directions, the niceties of how our journeys have been take a moment or two while we rid ourselves of coats and settle down. There is an instant thaw and our conversation starts easily. Clare tells me she grew up in Glasgow. She has a soft, warm but insistent way of speaking, the cadence reflecting her roots.

Her involvement with needlework began when her mother introduced her to it as a child. She has since been a banner maker, a curator of needlework projects, the founder of Needle Works Community in Glasgow, and the Material Works Project across Scotland. I ask her where the urge to write came from. She says, “It has always been there. As a child I wrote fairy stories, and then teenage poetry, when one’s heart got broken for the first time.”

She studied English at Glasgow University and on graduating worked in Youth Theatre. She then moved into Arts management in England, honing her skills writing reports: “I was still writing; grant applications, trying to make words move people enough to give us money.” On returning to Scotland she became involved in banner making and community textile projects. “In a sense, sewing became my language”, she observes. Her ambition to write remained and in the nineties she “wanted to have writing as [her]… last career.” She then decided to write about what she had always wanted to write about: textiles.

I tell Clare that reading Threads of Life plunged me into a world of which I knew very little, but I quickly became intrigued by the place needlework has in culture and communication.  When I mention how stiring I find some of the stories she replies, “They are moving. I mean they genuinely are moving, [and] it is not that I have created them.” These are stories of people who in straitened circumstances, in prison, in mental institutions, in prisoner of war camps used needlework as a means of communication, of marking their existence. She remarks,

I was about halfway through writing the book when I realized this is a book about values, it’s about human values, such as community, such as diversity, such as inclusivity, about how the act of sewing, metaphorically of course, is about bringing things together, joining things together and I think that is a strong feel for the book itself, how people are connected with one another.

When she says ‘values’, I hear West Coast cadence emphasizing its first syllable, giving it a feeling of greater weight.

I remind her of the connection she described in Threads of Life where she comes across a woman from the Miao community in South China who spoke no English. The woman visited her unexpectedly one evening when Clare was feeling lonely.  She describes how they managed to make a connection through their shared interest in textiles,

It became as good a way of communicating as any other and then it felt completely natural to be dancing together in a dark room on Christmas Eve, which is extraordinary when you think back on it, that you would have the physical contact as well as emotional contact which we definitely had. And then the feeling of the pang of separation because both of us knew there was never going to be a friendship. There would never be anything other than the expression that we made together that evening.

Clare moves her hands together repeatedly to emphasize the connection she made with the Chinese embroiderer.

We pause for a moment and the noise of others’ chatter around us brings us away from that evening in southern China. I move on to ask about Clare’s vision for the structure of the book. She reminds me of the italicized text that opens the book, ‘You cut a length of thread, knot one end and pull the other end through the eye of a needle….That is all there is, thread, needle, fabric, and the patterns the thread makes. This is sewing’, and observes, ‘I wanted to say that this is actually about something very simple because not being knowledgeable about sewing might feel like a barrier to people.’

She says that in order to reflect on different aspects of needlework the chapters needed word headings, for example Captivity, Power, Work, and Voice; each allows the creation of a box to place thoughts. Visually, she explains, she drew out a square and wrote into that square what could be put in under the chapter heading, and over time people moved from box to box, themes and headings changed. This system provided a means to order her thoughts. ‘Like patchwork,’ I suggest.

I ask if she sees other similarities between her needlework and writing processes. She likens the creating a lexicon of appropriate words under each chapter heading, gathering small notes as if to choosing piles of fabric and matching threads, but then she says,

The intent for the book as a whole, she tells me, was a three pronged idea, ‘It would be like a history book, a memoir, and a reflective journal. Those were the three areas I was trying to achieve and I wanted that because it’s a bit like the multi- layering of sewing itself.’

The depth and detail in each story is apparent in the descriptions of Mary Queen of Scots communicating from prison through her embroidery, of women making patchwork quilts in Changi prison and, heartbreakingly, and the story of a small white handkerchief , embroidered with the names of seven girls who were to be forced into sexual slavery in Java in 1944.

There are life-affirming stories too about Clare’s own work in the chapter, ‘Community’. I tell Clare I feel there is a passion in this section of the book, a passion about community and community activity, a voice of gathered people who express that voice through communal sewing. We giggle a bit at this point because on the wall of the café is an enormous sign saying ‘Passion served in every bite’. We laugh and share examples of how this word is so often overused.

Clare says that hopefully her drive comes from her respect for the communities she has worked with, where people might not feel they have immense skill but have many stories to tell,

My privilege in a sense has been to be able to encounter different people in what seemed to be often very difficult circumstances, and then with them make something that is remarkably beautiful and remarkably telling of their lives. What I love about working in that large-scale is that it is a revelation when you finish and see the piece of work put up boldly on a wall. It is always a revelation to those who made it and to me who helped them make it because it has a presence that is just so helpful and speaks so strongly of who they are and what it is they’ve got to offer. I do this because it brings me enjoyment and it brings me a kind of relish and optimism. It brings me my sense of community and my belief in community.

I ask whether writing a book, which is of necessity a more solitary occupation, posed any difficulties for someone who so obviously loves being among people, and has been involved in community work for a long time. She says not. She was writing the book at a time when her children were in their late teenage years and thought it was ‘probably time for me to take my eye off their ball.’ 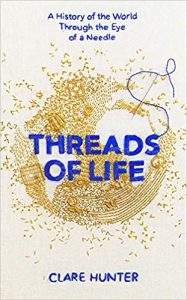 Since the publication of Threads of Life Clare describes the media as being both attentive and kind. I ask how she felt the first time she held a copy of the book in her hands. Her response is immediate, ‘I felt it had absolutely nothing to do with me. It felt completely divorced from anything I had done.’

She explains that she had only ever seen it previously as pages of A4 paper, and she knew where everything was within that thick wad of paper. When it arrived as a book its whole physical quality had shifted and it no longer accorded with her knowledge of it, ‘I didn’t read it for a good month. It just sat there and I didn’t know what to do with it really. I was thrilled to see it, don’t get me wrong, absolutely thrilled to see it, but it just felt as if it was something that had been done elsewhere by other people. Although I knew I’d written it the actual thing as an object, as a book, no longer seemed to resonate with anything to do with me.’

This seems a sharp contrast to what Clare has told me about finishing a banner or a piece of work which is held in hands, or placed boldly on a wall; so I ask her about hearing it being read on the BBC’s ‘Book of the Week’,

It was interesting because hearing it read back I was very curious to see how that would feel, and when the reader got into the chapter ‘Captivity’ I found myself crying. I was affected by my own words. Somebody reading it back to me made me realise they were such sad stories you know.

Clare is currently undertaking a Masters in Historical Research at Durham University and is digging her needle deeper into the research she has previously done on Mary Queen of Scots, and tells me, ‘actually just re-claiming that solitariness of research is fantastic as I’ve learnt to love it. In Renaissance times textile was one of the most important forms of communication, and there has been little scrutiny of Mary’s use of textiles, so my intention is to write a creative book alongside the research.’

I thank Claire for talking to me about the threads of her writing life, the creation of her book, and her future projects. We sit for a few minutes chatting about the different parts of Scotland we have lived in, East and West, wish one another safe journeys home, and after a warm hug she is gone.

I look inside my copy of Threads of Life where Clare has signed it. There is humanity in this book within the themes she has explored. The stories touch the deepest part of us, stitched together by threads connecting us one to another. Woven through this are parts of Clare’s own story, her journey through needlework. I take a moment to read the second section of italicized text which closes the book:

Then you push your threaded needle in one side of the cloth and pull it out on the other, on and on in rhythmic sewing, until you have made something that matters: a thing of beauty and meaning, an embroidery that holds your spirit fast within its threads.

I feel glad of our short time of connection talking about this powerfully engaging book.