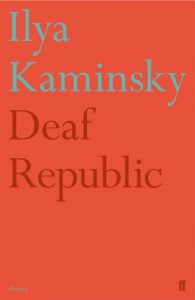 Deaf Republic begins with a gunshot. As an innocent deaf boy falls to the ground, the townspeople choose silence over the sound of a child’s body hitting the street, a sound that would be filled with pain and injustice: ‘The sound we do not hear lifts the gulls off the water’. The rest of the collection tells the events unfolding in an occupied town, Vasenka, in the midst of a political conflict; Vasenka engulfed in silence. A town where people communicate using sign language, yearning for freedom.

Born in the Ukraine Ilya Kaminsky is a hard-of-hearing translator, professor, critic and a poet. After Musica Humana and Dancing in Odessa, Deaf Republic is his third poetry collection published in English. The collection feels more like a script split into poems than a poetry collection. Every poem follows directly from the previous one, all of them connecting to tell a story that is so cinematic and engaging that at times I had to remind myself I am reading a book, not watching a play or a movie. Split into two acts, the collection first follows the dramatic relationship of Alfonso and Sonya, where happiness of a newlywed couple is overshadowed by the pain of premature loss. The second act revolves around Momma Galya and her puppet theatre leading a silent revolution, luring the soldiers with sexual pleasures, making them disappear behind the curtain.

In this exceptionally written collection, poems that would be powerful enough to stand on their own reach new heights when put together. Brutal and uncomfortable, the imagery reverberates page after page and long after the end. Kaminsky shows the despair on a personal scale masterfully, focusing on the details that evoke deeply rooted emotions despite not naming them:

For our child I fold the newspaper, make a hat

If pain was the defining feature of a great poetry collection there would be too many great poetry collections; Kaminsky understands that he has to avoid making Deaf Republic shallow by only leaving his characters in despair. Again focusing on small details, he shows the beauty in Sonya’s and Alfonso’s marriage, the naive mutual fascination of the newlyweds:

You step out of the shower and the entire nation calms-

a drop of lemon-egg shampoo,
you smell like bees,
a brief kiss,
I don’t know anything about you-except the spray of freckles on your shoulders!

That beauty and a sense of naivete doesn’t revolve only around the newlyweds and their daughter, but also the life of the town, which becomes the world at large:

You will find me, God,
like a dumb pigeon’s beak, I am
pecking
every which way at astonishment.

However all that is taken away by the soldiers amidst the conflict, which makes the book even more painful, because,

What is a child?
A quiet between two bombardments.

Deaf Republic examines the damage that silence can inflict. What might seem like a form of rebellion in reality only fuels the enemy:

They take Alfonso
and no one stands up. Our silence stands up for us.

‘The Townspeople Watch Them Take Alfonso’

Kaminsky criticizes that lack of resistance, especially in the last poem ‘In a Time of Peace’, set in the modern times, where a man is shot by a cop while reaching for a driver’s license. In this peaceful country everybody goes about their daily routine, watch a shot boy lie on the pavement. Silence is a perennial danger.

Deaf Republic is an exceptional read, one that I have already returned to several times over the course of writing this review. It is a collection not to be missed not only due to its timeless social relevance but also the poetic richness – a world of pain, despair and injustice but also of awe and beauty, page after page unfolding under your fingertips.