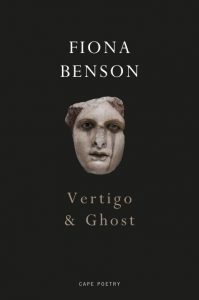 Capturing the experiences of womanhood with currency for our time may require an acknowledgement of contrast, notably between the furiously public domain of the #metoo campaign and its associated high-profile sexual assault cases, and the hidden realities of motherhood and female domesticity. Fiona Benson’s second collection of poetry, Vertigo & Ghost, delivers a duality that speaks to both.

The book is split into two sections: the first a dramatic and violent retelling of the Greek mythology of Zeus as a serial rapist; the second, an intimate and often lyrical account of family and post-partum life. Astutely, Benson preludes both with a first poem about puberty and the awakening of sexual desire in teenage girls:

we talked about who’d done what with whom
and how it felt, all of us quickening,
and sex wasn’t here yet, but it was coming,
and we were running towards it […]

The collection moves immediately into the crimes of Zeus, contemporised through the additions of parole, electronic ankle tagging, and recognition of the consequences for victims. Benson also signals towards modern miscreants, including the convicted former Stanford swimmer Brock Turner:

To those who avail themselves of online feminist discourse and outrage, the recognisability of such an example causes a torsion between mythology and the modern day, forcing the timelessness of Zeus’s brutality upon the reader.

Power, ineloquently expressed, appears in the capitalised shouts from Zeus, even gesturing towards a present day exemplar of the issues:

I LOVE THIS PRESIDENT.
HIS SHINY GOLD TOWER.

Overwhelmingly, this first section is brimming with rage and gendered aggression, of fear and loathing, of damage and deviance. The language is purposefully graphic throughout, nauseating but necessary.

By the second section, Benson has already primed readers for the unexpectedly brutal terrain of growing, birthing, feeding, and loving. ‘Afterbirth’, however, has a delicacy of touch, using the fewest of words to convey bodily trauma:

Meanwhile there is a lightness about ‘Placenta’ which is occasionally interrupted by pragmatism, describing the placenta, for example, as the baby’s ‘unwieldy carry-on’. Poems such as ‘In the milk days of your sister’ and ‘Daughter Drowning’ speak to the often unacknowledged guilt that accommodating a second child can cause a mother.

Of particular note must be the beautiful poem ‘Ruins’, an altogether arresting portrayal of the ravages of maternity on the female form which segues seamlessly into a celebration of the life it birthed. It should be mandatory for all post-partum mothers to tape a copy of it to their floor mirrors:

amen I say
to my own damn bulk,
my milk-stretched breasts –

Where the first section is loosely structured, fragments building together to form a complete picture, the second section feels more aesthetically traditional in presenting discrete poems. An atmospheric danger permeates both sections of the book, with powerlessness as the sad refrain that binds women together through both halves. The command of form is confident and this second collection from Benson, herself already a Faber New Poet and previous winner of the Seamus Heaney Prize, is important and affecting.