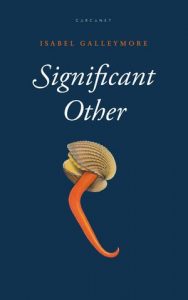 Isabel Galleymore’s first full collection begins with an epigraph from Donna Haraway drawing attention to a planetary ecology where different species share developmental trajectories and living spaces; these are ‘companion species’ that are nevertheless distinct and irreducible one to another.

The challenge in Significant Other is to avow species strangeness without estrangement. Not to exoticize as a property of the other; not to anthropomorphize with an all-too-easy intimacy (‘Did the creature ever think/a thought her way?’) or to sentimentalise generically (unyoking the conventional ‘bees from their busyness,/cats from their curiosity’); not to colonize (‘Isn’t it shocking how he speaks for her?’) or brutalise. Galleymore’s choice to focus less on furry mammals that we have remade in our own image, but on more unashamedly creaturely organisms such as gastropods, molluscs, crustaceans, fish, insects and raptors is surely deliberate. In the main, the latter are small, trampled on, mostly overlooked and forgotten.

Acute, alert and slow looking are instructive acts of defamiliarisation; in ‘Robin’, the bird is a road sign ‘fire warning in its breast’, in ‘Worm’, the physics of a bird pulling a worm from the soil is inverted whimsically, and the queer love-life and death of limpets are imagined in all their glory in ‘Slipper Limpet’ and ‘Limpet & Drill-Tongued Whelk’. But attentive looking also proffers an imagined connection; in ‘Tended’, the man in the garden sees a bee, ‘From the corner of his eye, he sees her/raise her claw as if to wave.’

Yet Significant Other is a collection preoccupied not only with creatures but with their renderings in poetry. Metaphors provide the imaginative carrier across different states, a rhetorical gravity-defying leap across the stanza break:

The difficulty of such figurative bridges, as Dorothy Wang puts it is, ‘How does one negotiate between similarity and dissimilarity without, on the one hand, collapsing difference or, on the other, being unable to bridge the gap separating the terms?’ This is posed in ‘Sea Horse’ as,

That desire for identity ‒ oneness ‒ is probed self-reflexively and figuratively

In a collection focussed on writing as writing, Galleymore’s occasional very sparing use of punctuation tempts us into imagining different ways of reading a line, as does her deliberate use of line breaks where you might not expect one to occur. For example, in ‘Rainforest Spelled Backwards is Lustful’,

might yield a tautological ‘I become self’, a grammatical morphing of subject into object and a travelling of voice from second to first. Change, metamorphosis, movement from one sex to another are also the stuff of poems in a collection where identity is becoming, and where love imagines entanglements between disparate things, ‘the bridge that links/this part of the earth with the next.’

Significant Other offers an exercise in thinking, reading and seeing differently. What it nets in its slow, attentive looking is the joyful strangeness of life forms, and what is does with them is to puzzle over how to render them on the page. For the future of the planet and for our shared lives to come, both endeavours are sorely needed.