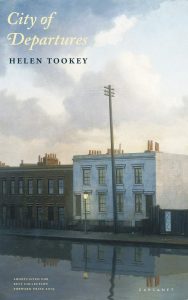 City of Departures represents departures from home, touching down in a number of European cities, but it also represents a departure from reality, diving deep into an uncanny, dream landscape. That landscape is urban, but it is not to be found in the busy carriageways and shopping centres, nor the packed pubs and restaurants and travel links of a city. City of Departures bases itself in places in-between, the ones people don’t take notice of ‒ the docks and bridges and canals that are routes in and out of cities.

The poem that inaugurates the collection’s eeriness is ‘Equinox’, the first poem in the collection. Despite its frequent references to everyday, mundane objects and scenarios, it is somewhat detached, and shows the poem’s speaker stepping back and reflecting.  Written in eight sets of couplets, its structure reflects the duality of the equinox itself as a balance between light and dark:

The year is balanced, for a moment only.
Disequilibrium is the rule of course […]

In the first line, Tookey deals with the surface of what the equinox represents and you might think, if your eye travels no further, that it reads like a definition. However, the second line and its supplementary phrase, ‘of course’, implies a certain irony ‒ as though there is actually little surprise in the fact. This juxtaposition of balance and disequilibrium turns the couplet into a neat reflection of the equinox: two opposites posed against each other. The third stanza furthers the sense of opposing forces:

In my dream the twins were fighting,
each hell-bent on her own direction.

Here, the twins might be Gemini, the zodiac sign of duality. However, rather being peaceful two-sides of the same coin, Tookey’s twins are at odds with each other. The word, ‘hell-bent’, and the chaos it implies, contrasts with otherwise celestial figurations. The next couplet deepens disequilibrium with visceral imagery ‒ ‘muscles pulling’ and ‘bones grinding’ ‒ allowing the reader to feel the desperation of a struggle as co-joined twins.

There are everyday occurrences of disharmony in the sixth stanza ‒ again ironic, given the title of the poem. The phone text that the speaker receives suggests that the sender is having an all-round bad day. The objects referred to (‘broken… cup’, burnt ‘toast’, ‘melted… handle’, ‘stovetop coffee-pot’)  are household items. While households are archetypally places of warmth and harmony, of coming together and safety, here home contains as much chaos as in the earlier stanzas. There is a poignant end to the poem where the equinox’s symbolism is remarked upon as

a stay against chaos,

a blocking spell against all the unmakings
massing like static, heading our way.

City of Departures makes the observation that humans have a tendency to try and make sense of the occurrences outwith our control ‒ unsettling chance meetings, uncanny, dream-like scapes (‘but the garden is sudden and strange in the moonlight:/thorn trees, battlements, everything a knife-edge/version of itself’), strange things, people and doubles, (‘the solid shape/of her against not-her’). Scenes of intimacy and estrangement bleed into and echo each other throughout Tookey’s collection. There is a shuttling of forms and voices too, from poetry to poetic prose or prose poetry, from first to second to third person, from letters, conversations, to half-remembered encounters and dreams. Departures might allow for reflection, allowing one to step away from the busy hustle and bustle, and enter another world; yet revenants also return.

The prose piece, ‘Skizzen / Sketches’, which closes the collection, makes its travelling through European cities, art and literary texts real and local, rather than imagined and ghostly. Of the poet, Ingeborg Bachmann’s poem ‘Bohemia lies by the Sea’, Tookey writes, ‘The poem enacts a kind of dance in which the key words, the key ideas, keep circling and returning and transforming to their opposites, and in which self, world and word are not separate or separable.’ Such an observation might be taken to be a fitting characterisation of the haunting transformative energies of City of Departures itself.