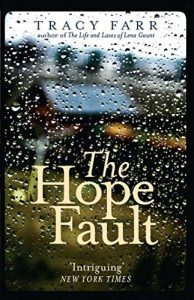 Not all fault lines cause violent eruptions. Often the plates do not collide but slowly shift, causing imperceptible change, yet over time, creating powerful new landscapes with small movements.

Tracy Farr’s elegant and pensive novel, The Hope Fault, honours the force of the fault lines that run through the earth, through humanity, and through our genealogy. The novel recounts a significant weekend in the lives of an extended and complex family as they gather together to pack up, celebrate and prepare to sell their shared beach house in Cassetown, Australia. However, while we are quickly made aware of previous infidelity, divorce, emotional angst and suggestions of an intriguing familial history, Farr’s story focuses mostly on the aftermath of these ruptures, in the here and now of a surprisingly settled and civilised congregation of relatives, offering intricate observations on the seemingly insignificant routine interactions of a blended family.

Iris, ex-husband Paul, their son Kurt, niece Luce, Paul’s young new wife and unnamed baby meet at the Cassetown property but are immediately driven indoors; the heavy and relentless deluge of rain sets a reflective and resigned mood throughout the entire book. Given the complex relations confined under one roof, the reader would be forgiven for expecting a build of tension and subsequent dramatic eruptions but The Hope Fault concentrates our attention on each character’s slowly evolving identity within an ever-shifting family landscape.

With the impending sale of the home in which Iris and Paul had once lived with Iris’ mother Rosa, the home in which they had hoped to grow old together, the group begins to pack up the contents of their previous lives while unearthing revelations and secrets that have influenced family dynamics. As the weekend progresses, each character becomes more familiar, more entwined with and accepting of the others, as faults are embraced and scars begin to heal.

The story is narrated in three sections and with little haste until the voice of the elderly grandmother, Rosa, appears midway through the book, providing snapshots into significant moments that changed the lay of the land for both Rosa and her descendants. Farr plays with the concept of time as she tells Rosa’s life in reverse chronology, and in the first person, captivating and intriguing the reader as her mysteries unfold. Rosa’s presence is felt throughout the novel with each character suggesting a fond connection to her, making the packing up of her belongings painfully poignant and Rosa’s personal insights a privilege for the reader to experience.

Farr’s elegant and descriptive language captures the ordinary and intricate moments of daily family communications; for example, she writes,  ‘it’s about time that you all moved on. She finds herself repeating it, like a mantra – move on, move on, move on – a kind of a beat you could march to, or breathe in time to.’ Through the complex characters of a broken and fused family, Farr explores the acceptance and embracing of ever moving fault lines and familial structures. In The Hope Fault we find a tender and captivating read that enthrals with its intimate observations of the lives of a reconfigured family; observations that reveal how slight shifts of circumstance can subtly affect through family lineage and personal identity. The Hope Fault leaves us with a quiet sense of hope that not every fault line will cause tremors enough to devastate but, rather, many will gently mould and carve us into the stronger individuals and families we are destined to become.