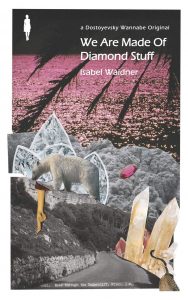 A 36-year-old queer working-class migrant arrives on the Isle of Wight and gets a job with best friend Shae in a trashy hotel with an absent boss and equally hard to pin down wages. Attempts to gain citizenship amidst the Brexit chaos are constantly thwarted, UKIP supporters lurk on street corners, and an alcoholic parent never quite appears.

Even before the first page, there are indications that Waidner’s second novel, We Are Made of Diamond Stuff, is purposely pushing boundaries. There is a note to alert readers to the list of referenced material in the back of the book and a contents page whose chapter headings draw evocations of Situationist posters or the type of captions seen on memes for millennials:

This punchy off-kilter tone continues as the story unfolds. Throughout the book, the pages are peppered with brackets and ALLCAPS: brackets serve as a note of calm explanation amidst the chaos, and the capitalised text becomes their manic antithesis, screaming in joy, rage or confusion.

While bosses and parents are pointedly absent, a cast of sidekicks and villains come to life from unlikely corners. Polar bears leap from their embroidered position on Shae’s t-shirt and playfight with a pair of Reebok classics on the hotel reception desk. Shae and our nameless narrator try to follow along with the childlike exploits of the Reeboks (who are poets) and polar bears (novelists).

Yet these are not the only surprising cameo parts in this bewildering slapstick noir odyssey. In a rapid-fire stream of consciousness, our hero introduces real world contemporary indigenous poets, 70s avant-garde novelists, fashion designers, social theorists and disgraced figure skaters. The effect is of a gloriously dysfunctional extended family of characters, objects and ideas struggling to relate.

Therein lies the beating heart of this novel — a story about relationships. It is a touching and precisely observed depiction of queer friendship, but beyond that is a story of the relationships that we have with the symbols that clarify, restrict or liberate human experience.

Isabel Waidner is not just a socially conscious novelist; they also happen to be a critical theorist intent on weaponising avant-garde literature for the fight against a multitude of contemporary evils. We are Made of Diamond Stuff playfully takes aim at elitist prescriptions of cultural value by pitting vibrant symbols of working-class identity against villains appropriated from the middle-class literary canon. By depicting the nightmare Brexit tension with creative irreverence, Waidner challenges nationalist assumptions of identity and belonging. After passing their citizenship test, the protagonist is handed their certificate:

Keep this certificate in a safe place, it says. The test centre does not retain records of test outcomes. What is it with the Home Office and safe places, they really have no idea.

In notes about the novel published in Hotel magazine, Waidner asks, ‘Can we have fictions that try to help advance a progressive politics within marginalised communities and beyond, please, and can these fictions function as a mode of cultural resistance.’ We Are Made of Diamond Stuff will do this and more if readers are brave enough to lean into its disorienting wisdom.