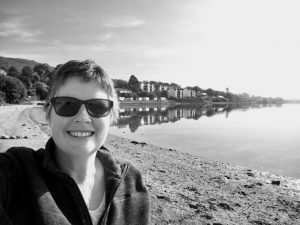 Brenda McHale loves to play with words, either as a writer or as a copy editor and proofreader. Her working life has spanned over 30 jobs from making chip pan baskets to childhood practitioner, so it’s perhaps not surprising that her writing is also eclectic. She has featured in The People’s Friend, Northwards Now, Reader’s Digest, Early Years’ Educator and in Plastic and Rubber Weekly, which is much less interesting than it sounds. She has ghostwritten several books on environmental issues and personal development, topics she cares deeply about.

Although she loves to write short stories, her Mlitt has convinced her that her real love is non-fiction, and her portfolio of memoir pieces confirms to her that everyone really does have a story in them. Writing allows her to sort her own story out. As someone famous once said ‘How will I know what I think until I’ve written about it?’ She loves, LOVES, to research things and her favourite thing to do is to get lost down the internet warren and pop up somewhere unfamiliar and unexpected. She is currently working freelance, writing children’s non-fiction books, which allows her to indulge this passion. She considers herself lucky in life.