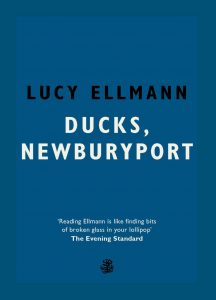 Ducks, Newburyport is Lucy Ellmann’s eighth novel. This is a big book by any standard. In it I met a woman who made me look at the world her way: a working Mom, anxious about her four children, worried about Trump, the state of America, gun violence, and broken by the death of her mother, her own medical concerns, and her lack of assertiveness. I was plunged into the mind of a woman living an ordinary life in Newcomerstown, Ohio; her thoughts spill onto the page, a torrent of words, a current which carried me through the intricacies, ordinarinesses, joys and heartbreaks, self- doubt, what ifs and if onlys. She annoyed me, made me laugh, and sometimes almost cry.

So far, so ordinary. What makes this novel extraordinary is the extent of it, and not just its length or its unusual structure, but more importantly the way Ellmann sustains a level of detail in the internal musings which has no let up. Every word, every odd thought, every diversion onto lists of movies and actors counts, every half hummed tune and remembering builds like the brushstrokes in a vast Serrault painting.

Within 900 pages of internal thought-stream that is peppered with remembered lines of song and random unwanted memories, Ellmann creates a rhythm, allowing the reader to ride the flow. Despite being written as a single sentence, the novel’s rhythm is addictive. Each section starts with ‘the fact that’; facts are fragmented, interesting and often funny. With no omniscient narrator the woman’s thoughts occur in lists as her story unfolds. Time shifts from present to past to future in a blink. This might seem a daunting read but once the rhythm takes hold, the reader ‘gets’ it.

There are times where it feels as though this woman could be one of our girlfriends venting on a night out. Other times it seems she is a computer with an overfull hard drive and stuff is just spilling out. The nameless woman compares her life with Laura Inglis Wilder’s tale of the Little House on the Prairie, and the American dream is scattered among her thoughts like so many lost jigsaw pieces.
There is a parallel narrative about the questing journey of a wild mountain lion which interrupts this internal monologue several times. These sections are written in sentences, the reader observing the lioness moving quietly and purposefully through the countryside. They provide an elegant foil to the tumult of thoughts the nameless woman is prey to.

Ellman uses motifs in both narratives, reflecting ways in which violence is perceived. The lioness is following her instincts, protective of her cubs, ‘lives engendered by her body, created inside her and released through pain and panting on the world’; the woman worries about gun culture, checking out a family’s attitude to guns before letting her kids have a sleepover in their house. The two narratives merge towards the end of the novel, sharing a recurring theme of the precarious nature of life.

The number of words and the sheer volume of images in the monologue thought-stream sections of the novel have the effect that a filmmaker might use of ‘panning out’, so the woman’s vulnerability is emphasised by the singular dot she becomes in an American landscape that homogenises the individual,

The fact is this book is filled with all the issues of modern life we face politically, socially, domestically. Ellmann created someone who has thought about them all. Ellmann made the woman real through those thoughts, giving her a unique, authentic voice. Whether that voice speaks to your thoughts and opinions, or merely irritates you, it leaves a lasting echo after the final full stop.