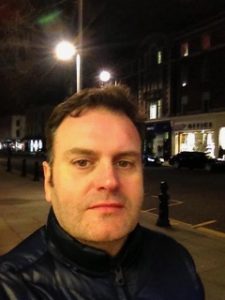 After a long apprenticeship in healthcare, with a short detour in education, William Hume (aka Ian) arrived in Dundee with no other expectations than to develop his writing skills. The rigour of workshops, seminars, tutorials, reading, writing and feedback exercises that followed directed his interests into poetry and essay writing, a few samples from his most recent project, Green Ray, are included here. Ian is currently Poetry Editor of DURA.

From ‘Remembrance’, an essay on the cinematographer Agnès Varda…

Reflected light illuminating pink and burnished tones of bared skin, limbs folding into an almost-embrace, mouths open, expectantly, were astonishing in the Catalunyan sun. Scuffed and bruised, shoeless feet calloused and so swollen with blisters that they would have found it painful to stand up let alone walk on them. An abandoned elbow-crutch lying nearby. Two homeless men, on the streets of Barcelona, inured by the day’s heat on the cool marble of a shop doorway in a miraculous pose.

My friend insisted that she had never witnessed such a thing – not that she didn’t believe what I was saying – but she was mystified that in all her years of walking the streets in and around Barcelona, in all seasons, from Eixample to the Ramblas, she had never seen these two marvels of human flesh. What she meant was she had never glimpsed what I had in those briefest of moments. A sad predicament for these men, of course, whose lives had far greater instrinsic value than as subjects for a still-life. This was a fleeting observation all of fifteen years ago and was remembered in our conversation about observations of the human body as artists have made for centuries; as photographers and cinematographers like Agnès Varda continued to do until her death earlier this year.

I mention Varda because of my interest in her inventiveness, sometimes playful yet often serious, in pursuit of reality and what these captured realities as photographic images show us as spectators. I could add Lee Miller and Cindy Sherman into the mix but it’s Varda’s cinematographic language, her self-styled cinecriture  – a unique blend of cinema and writing – of which I am especially fond. The calm with which she approaches her subjects, looking for a story and the serendipity of finding one. Often a game of chance from which she maps out her narrative. Watching and re-watching Visage, Village (2017), I am struck by her devotion both to her art and the connections she makes with ordinary people; listening to their stories and from them creating something quite special. By special I mean something that chimes with my own interests, my poet’s sense.

In one episode of filming in Saint-Aubin-sur-Mer on the Normandy coast, she and her co-buddy, JR (who has the insouciance of Jean-Luc Godard in a pork-pie hat with a friendly unwillingness to remove his dark glasses), consider what to display. A German WW2 bunker pushed off the clifftop several years earlier by locals, a stark and interloping presence between land and sea, is selected as the ideal surface on which to paste a monumentally scaled image of Varda’s photographer friend, Guy Bourdin, who died in 1991. The photo she shares is of him as a very young man taken in a relaxed pose against a beach hut, legs outstretched with trouser-ends rolled. It was taken by her in the summer of 1954 when Guy was still living with his grandmother. The transition is an emotional one, as he appears a boy cradled by the contour of the bunker; an odd counterpoint perhaps. The next morning, the image is gone, missing from the landscape – overnight tidal surges have washed away all traces of his re-imagined presence […]

[…] there’s not much my mother could tell me about this old snap, for that is what it was, from probably the late 1940s. She hadn’t known of its existence until I received it as an email attachment from another cousin, Julia’s daughter, who also had been puzzling over its provenance. My mother looks about 11 or 12 so that means it was taken in 1948 or 49. All three are wearing dresses with granny in the middle; grandaughters on either side, hooking arms, right legs stepped on a grassy verge. A conventional pose. Granny’s head is held slightly to one side as if unused to the camera; unused to days out with her girls. My mother’s legs are sparrow-thin and both she and Julia, who is five years younger, are wearing sandals and ankle socks, a sure sign of summer. Margaret, Margaret senior, and Julia hair in plaits – apart from granny, whose grey hair is scraped back in a bun emphasising her near-Slavonic cheekbones. Even from the monochrome photo, you can tell my mother’s skin tone is sallow, hair raven; different from her cousin’s.

Wind through hair as all three sit with hands gripping the edge of the back seat, smell of leather upholstery mingling with ozone, gazing down at Croy and Culzean; a dazzling azure of sea from Electric Brae. I wonder if the coastal railway was still open on that day and if Julia’s aunt, also Julia, and her GI Joe boyfriend glimpsed the steam train as it chuntered through clouds of yellow gorse […]

And all the time there is death. Death in this garden. Death in Jarman’s garden. Yet, I look to Rembrandt and I see not so much death as one who has lived and is contemplating life. His paintings offer his autobiography. The way he looks. The image once captured in his mirror is how he looks back at me in these paintings, offering a real connection with the painter, the grown man. His past achieving my present. How he’s feeling; how he’s looking after all those years. I’m more restrained than Varda and walk this long gallery, looking. What I see is not only Arcimboldo’s L’Été but humanity; what Varda has captured. But what do I mean by this? I see my own experiences in the faces of the sitters, my patients. In particular the old man in my first ward, my first experience of unimagined death.

There you are, my familiar
waiting in the blue chair, your head
forward, cyanosis a pressed
blackberry on your lips
in this late light, hands
clasped in the same fretful hue,
knees shuddering against
this last admission.

You remind me
of a Rembrandt painting –
Amsterdam merchant,
head almost hanging
against layers of fur and wool.
No heat in mesh blankets,
warmth only in these stranger’s hands
but they cannot reach you
from the shadows.

I always approach you head-on,
today my path is other.
Pate of your head, eclipsing moon.
Encircling, my camera eye
sees every line, every contour
the turgor of your skin
torment of not knowing
where you are.

Today I am leaning against the space between The Anatomy Lesson of Dr Nicolaes Tulp and myself in The Mauritshuis. You depicted as painted from shadow are the body as remote from me as you are from Dr Tulp leading his lesson in which the sinews of your left arm are bared for all to see. The fibres of your body dead to the world, to all feeling. The junior doctors view the tendons from different perspectives, different places in space revealing aspects hidden to the others. How the light in the dissecting chamber refracts through their viewing spaces, through motes of dust diverting them away from Dr Tulp’s didactic display.

These parallaxes in Rembrandt’s painting mirror my own as I attempt a simulacrum of the doctors in theirs, moving to see what each of them see. But I cannot see what they see. I can never be them. I cannot move from my imagined space in the gallery into the two dimensions of the painting. I cannot attend those spaces on that day in that light in the mind’s eye of the painter. And so their secrets are preserved – both what they see and what they are thinking, a mystery.

The odd depiction of your arm suggests error, a misunderstanding, from my limited knowledge of anatomy. Intentional perhaps, a joke like the R drawn from your body’s umbilicus revealing something of the character of the painter. His vanitas in umbra mortis. But it’s the body in death and treated as object that fascinates me, galvanises me to the relative truth of the artist’s brushes in creating their own version of what the painter sees and in turn what he offers the viewer. They are all bodies, all objects offered up as subjects in this game of multiple perspectives […]

Often on this running board of light,
inured by Ness’s flooding calm,
where river meets estuarial Ore,

At Walberswick, hulls
rise-up leviathans
against low-lie of land.

Ferrymen on flash of silver
row farther than this channel
into grey tints and shadow.

The merchant. His affect.
His wife. Her affect, creased and rheumy.
Gold of their long union heavily worn.
They’ve seen a lot of changes in Amsterdam.
You only have to look to the past

to understand this present.
I could be looking at a portrait of my future self
in contemplation of these very moments.
Time loses meaning in rifts like these.
And there was this old man striking a similar pose,

heart shutting down peripheral circulation,
hands restless, magenta on lips
like the staining of crushed blackberry –
tastes of summers gone.
I wish I was a painter, like Rembrandt,

catching the last of this old man
before he fades completely;
skin tone, paler and paler still.
There’s catharsis in capturing realities like these.
Trimmed moustache, a trademark –

soldier then chauffeur, his niece said.
How he brightened with her touch, her voice;
his presence in her younger life, her past.
I imagine him leading the campaign in North Africa;
later, opening doors on civvy street…

my reverie is cut short
by a change in his breathing, loud and stertorous;
outward movement of palms, head in sideways droop.
I’d leave it there, knowing now how things just are
but in youth I had to wonder where […]

where the only light is an overhead moon,
the only air siffling through invisible grills.
No vestries smoked by tallow candles;

no stain-glass rattle of celebrants
singing gospels of their lives.
Like the Latin of their masses,

they have dwindled to nothing.
Texts blanked to silence;
gregarious chanting replaced

names are dates linked with parables
as greasy finger-trails reveal where they’ve been,
imaginations.

These tomes are seldom quiet –
histories of the centuries;
visions to those who read.