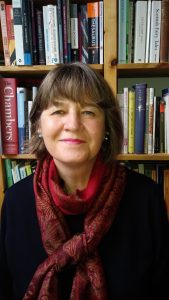 Jane Swanson has been putting words on paper and creating imaginary worlds since childhood. For many years she worked as an archaeologist, uncovering hidden narratives from deep beneath the ground, and later as a teacher, sharing her love of stories and writing with young children. She writes short stories, creative non-fiction, and reviews of fiction and art.

Jane lives in Aberdeen with her husband and has three children.

These two extracts are from Native: a novella in progress about Jenny, and the challenges that a diagnosis of breast cancer brings to her life and the lives of her family and friends. The first extract is after Jenny has received her diagnosis, and the second is post-surgery.

I remember a science experiment at secondary school. I remember sitting on a high metal stool at a shiny nut-brown wooden bench wearing a white apron and safety glasses.

We were investigating the different components that make up soil. We each had a clean jam jar filled with water and a spoonful of soil. We put the soil in the jar and shook it hard. The water turned into brown muddy soup.

After a few moments the different components in the soil began to settle and formed into layers at the bottom of the jar.  Sand particles settled first because they were large and heavy.

Lighter particles of silt settled in a layer on top of the sand. No one in the class knew what silt was and the teacher explained that silt is created when particles of rocks are worn away by water and ice. Silt changes landscapes, it settles in still water, filling in lakes, deltas and harbors, and disrupts their delicate ecosystems.  Silt is fertile and slippery when wet.

By the end of the lesson splinters of rotting organic material – grasses, twigs and leaves – floated on top of the water.

Four recent events have left me with a feeling that my life is being suspended.

I am not usually so suspicious.

Here are my findings.

We left the jam jars on the windowsill for several weeks. Over time the water became clearer, but there was a residue, a lingering murkiness the colour of weak tea.  The teacher never did explain what it was that remained in suspension in the water.

‘You need art to heal. Its three weeks since your surgery, your body has changed, you are down in spirits, you need to get out from the house,’ says Irina.

We meet outside an office block in town; the disused fourth floor is let to artists as studio space and they are having an open day. Irina greets me with a hug and I follow her inside. I think of her as my glamorous friend. Whatever the occasion, she wears something sparkly – even her rubber gloves are studded with rhinestones. She is petite, pigeon-toed with short messy blonde hair, a straight no-nonsense nose, and she wears a black biker-style leather jacket, skinny white glitter jeans and black strappy high-heeled sandals, despite the cold.

On the fourth floor the light from the smeary windows is hazy. Some of the artists have partitioned off the open plan space with makeshift screens and they work at easels or tables. Stacks of paper and boxes of paint are strewn over the faded blue carpet tiles, photographs and colorful canvasses brighten the scuffed walls. Some people are in conversation with the artists, and others wander around looking bemused and timid. Several of the artists have their studios in the glass-fronted offices that face onto the open plan space; the nameplates of the previous occupants are still on the doors.

‘There’s much to see, we go in here first,’ says Irina.

I follow her into a small office; sheet steel sculptures in human form are displayed on tall white wooden plinths. Stylized figures with thin straight legs and cut out shapes to denote body parts.

A tall man appears; he’s tanned with a grey beard, he wears a blue and white striped t-shirt and khaki cargo shorts and has knotted friendship bracelets round his wrists.

I am drawn to a stylized statue of a woman; it’s her stance that draws me in, the lilt of her body, the slope of her shoulders and the flick of her arm that flounces ‘Here I am.’ I look closer, there’s a deep cut under her left breast and my eyes fill with tears. I look away and blow my nose.

‘How do you cut them from the metal?’ says Irina.

‘By using a plasma cutter, but the process begins with life drawings,’ he says and he points to some sketches pinned to the walls.

‘I start with life drawings and summarize the original images into elemental shapes and curves. The challenge for me as an artist is in finding a balance between realism and abstraction whilst trying to honor the original hand-drawn image; people need to see something recognizable. At first, I used to cut the images from MDF board on a laser cutter, but they were too perfect. That’s not how we are. Every blemish or scar tells a story about a person’s experience of life, that’s what makes us who we are, so now I use a plasma cutter.’

I cradle my left breast; it’s healing, but tender.

‘How does it work?’ says Irina.

‘The machine cuts with a pin point tip of light, a super-fast jet of plasma bores a hole into the sheet metal, vaporizing it, liquidizing it as it moves. The metal’s strength is also its weakness; it’s so good at resisting damage that it can only be cut into simple shapes. Come, if you look at the front of the image, it’s perfect, like a mask, but if you come round and look at the back you’ll see its messy, where the metal has melted and oxidized into blobs and crusts.’

Irina straightens her shoulders and glances at me.

‘Why is the breast like that?’ she says pointing to the figure.

‘By chance. I can’t control how the images turn out, that’s what’s so vital about making art with a plasma cutter, it’s like the conflict in our lives between intention and chance. I program an image of the body into the machine, set a starting point, push the button, once the plasma starts to move, there’s no control, arbitrary damage is inevitable, but its unpredictable, every image is different.’

‘What is she called?’ says Irina.