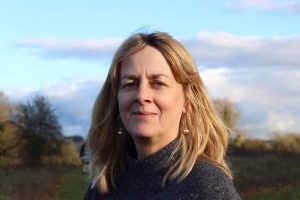 Elaine Burke is a writer of fiction, with a particular interest in crime. As a child she devoured the Famous Five, Secret Seven and Nancy Drew books and, at secondary school, her English teacher encouraged her to pursue her passion in literature. She left school at 17 to attend the University of Stirling, where she studied English, Modern Languages and Education, and at the age of 20 began her career as an English teacher in Dundee. While there, she met her husband and, after travelling extensively together, they started a family and settled in Highland Perthshire. This is the setting for her first crime novel, Run For Your Life, which Elaine began while at the Creative Writing Centre Moniack Mhor. This experience inspired her to take a career break and complete the MLitt in Writing Study and Practice at the University of Dundee. Her dissertation (Partings) experiments with a mix of genres and considers themes such as power, manipulation and identity in relationships. Elaine currently works in Outreach at Glasgow Caledonian University, where she continues to inspire young people to engage in literature and creative writing.

The door slams behind me, making me jump and knock my shoulder against the wall. Santini is renowned for its constant wind. It makes it an ideal island for a Sports Resort, an ideal island for what should have been an ideal holiday. A sharp pain runs down my arm and the suitcase falls from my hand.

The apartment looks the same and smells the same. It is an apartment like all the others we have been to over the years yet it is different. This apartment is special because this is where I last saw my little girl.

I rub my arm and enter the bedroom. There are two large white wardrobes and a long white shelf above the bed. It looks like a hospital. There is no evidence of previous occupants yet I still check inside the wardrobe and under the bed. This is the first time I have stayed anywhere on my own. No-one understands nor can I explain. I needed to come back here one last time.

I lift my suitcase onto the bed and open it. On the top lies a soft toy – a rabbit with a chewed ear – and I hold it against my cheek. It is a reminder of my previous life. I pick it up, sniff it closely and feel tears run into my mouth. I kiss it gently and lay it on the bed. She didn’t have it with her the last time I saw her.

But I hadn’t been able to look after her.

I curl up on the bed, holding the rabbit tight to my chest. The curtains move gently like sails. The wind makes everything move.  Curtains are different here: light and flimsy unlike home. I remember how hard it was to get her to sleep without the blackout blinds she was used to at home. I smell something sweet; it smells like the fairy cakes we used to make with the multi-coloured sprinkles on top.

I close my eyes. When I awake it is dark. I feel a soft touch on my cheek. I open my eyes wide but keep perfectly still, as if the music has stopped in a children’s party game. Slowly, I turn my head to the left. No-one there. I stretch my arm out to the right and sweep it above my head. No-one there. I can just make out the window and the curtain. The curtains flicker. Breathe. In for two, out for two. In for two, out for two. A footstep? It is a footstep. From outside the bedroom. A little patter like that of a child on Christmas morning trying to sneak downstairs to see if Santa has been. Patter. Patter. I take a deep breath and stand up, pulling a blanket around me.

The hall is black; no windows to relieve its darkness. I could use my phone as a light but I don’t want to make my presence known. Besides, I don’t have time if I want to catch up with the intruder. The tiled floor is cold and, knowing it could be slippy, I advance slowly. A cupboard door bangs shut behind me. I feel my way forward holding my hands out. Breathe. In for two, out for two. I concentrate on the numbers, coordinating them with my steps. Ten breaths and ten steps later, I reach the lounge. Moonlight shines through the large window, illuminating the L-shaped sofa. My eyes pan the room.

In a chair by the window is a shape. I rub my arm, still sore from its earlier knock, and the blanket falls to the floor. I shiver even though there are no windows open and the curtains, for once, stand still. I move closer. I can make out a shadow. Ella? My little girl. Is it my little girl? I can see a toy rabbit – grey, with the chewed ear. Ella’s. I shiver again. It is so cold. She is wet. She is cold. She needs a cover. I look around for the blanket.

‘Here, have this. You’ll feel better then.’

No reply. I creep closer, my eyes seeking to see. The moonlight still illuminates the chair but I can’t see her. I lean forward. Has she fallen asleep? Or worse, fallen from the chair?  But there is no-one there. I glance over my shoulder and shiver again. The wind? I check the windows, but they are shut and the curtains remain still.

I peer down at the chair again. On it is the old, grey tattered rabbit. I go back to the door and turn the light on. My eyes scan the room and tell me what I already know. I return to the chair and pull my legs up to my chest and listen: the wind is still. My shivering has stopped.

It was dark outside, but it made no impression on the darkness inside.

Alice had been gone for six months. Each day, Lily watched Peter check his phone, his emails and the newspapers. He blamed himself. She blamed him too.

She looked out into the blackness as she prepared his hot chocolate. It was her special recipe and part of the bed-time routine now. It helped him to sleep. He sat in the living room watching the news, but he could never tell her any of the news stories when she asked him. She thought things would be better by now, just the two of them, but they were just the same.

When she took his cup through, he nodded absentmindedly and Lily placed it carefully in his hands for fear he might spill it. He sipped on it slowly as the regional news came on and out of the corner of her eye, she watched him finish and place it on the table at the side of the sofa.

‘I’ve finished with this,’ he said, handing her the cup.

‘Make sure you wash it properly. That hot chocolate tasted a bit off! Have you been buying a different brand?’

‘No…I haven’t…sorry love. I’ll wash it now.’ And she left the room. In the kitchen she poured boiling water in the cup and, putting gloves on, scrubbed it until she was sure it was spotlessly clean.

She looked around the kitchen, checking everything was in its place before heading upstairs. Peter’s shoes had been abandoned in the hall and his briefcase commandeered the bottom step. She lifted it up gently and placed it on top of the shoe rack, carefully placing his shoes alongside. She wanted to make sure nothing blocked her passage on the stairs.

After a quick shower, Lily stood by the bedroom window. From here, she had a good view of the garden and she glanced towards the vegetable patch she cultivated with such care: the potatoes, the carrots, the broad beans – all nearly ready to pick. It was in darkness now, but she could tell you exactly where everything was. She had been out there this afternoon, digging, getting the area ready. Peter had no interest in the garden, so there she was free to do what she wished. This made her feel calm and after a short time, she put on her pyjamas and lay down in bed.

Sometime later she jerked awake. She climbed out of bed and, clutching her dressing gown tight, crept towards the window. Pushing it open gently, she felt the cool air on her cheeks. Now she remembered the nightmare. She had been rattling at a door, trying to get out. She pulled and pulled but suddenly the door had disappeared. She was inside a room with no doors! It was always the same dream. She shivered and pulled the window closed. Pulling her dressing gown tighter, she tiptoed back into bed.

When she woke again, Lily knew that something was different. It was quieter, and the air was still. She tried to stop breathing and listened. Nothing. This was it then. She looked over at Peter’s shape in the blanket and looked at the clock. 4.30am. Perfect. There would be no one up and about. Still, she should hurry.

She was glad of all the work that she had done in the garden now, as it had built up strength in her arms. Even though his body was heavy, she could roll him over with ease. The hallway was dark, but she was afraid to turn on the light. She made her way down slowly, step by step. She paused in the kitchen to get her breath back then opened the back door and, satisfied there were no lights on next door, she headed towards the vegetable patch.

By the time she had finished, it was beginning to get light and she felt hungry. After taking the wheelbarrow back to the shed, she lifted the rug and beat it with the brush. As far as she could see, the dirt was all off. She hoisted it over her shoulder and, enjoying its lightness now, she returned it to the bedroom floor. She would give it a proper clean later.

After her exertions, she was ravenous, so she headed down to the kitchen. Opening the cupboard, she took out her favourite French coffee and heaped three spoonfuls into the cafetière. As she did so, she lifted the hot chocolate mix and placed it in the bin. On second thoughts, she took it out and put it in the paper recycling bin. She went into the fridge and found sausages, eggs, and bacon and filled the frying pan to the brim.

A little later, her neighbour popped his head over the fence.

‘You’re not allowed bonfires in the town!’

‘I’m sorry – I hadn’t realised. I won’t have another one, honest!’ she said, smiling as she turned back to the fire and looked into the darkness.