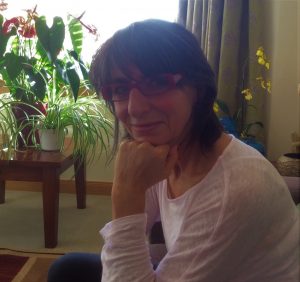 Geraldine Gould was born in Glasgow and studied Italian at the University of Edinburgh. She recently completed an MLitt in Creative Writing at the University of Dundee.  Her previous published work is poetry but more recently she has enjoyed exploring the craft of short story writing and other prose forms. Much of her work reflects the lives of older women who are so often forcibly retreated from view and whose experiences, which have their own vibrancy and legitimacy, are also made invisible. The pieces here, in a range of genres, are an attempt to attend to these experiences. She is currently working on a larger themed collection for future publication. All of her work is informed by a deep interest in psychoanalytic thinking.

She is a contributor to the DURA and she has read her poems at Live Wire in Dundee, and at Shore Poets and The Scottish Poetry Library in Edinburgh where she is a member of the Poetry in Practice group. She is also a singer, which she considers a significant factor in how she hears and creates language, and a keen equestrienne.

The poems and prose pieces in this slim collection, “We Are Still Here Too”, attempt to capture something vital and sadly disregarded at a number of levels in our world: that is the rich, sad, enlightening, disarming, challenging and at times rewarding encounters and feelings experienced by women in our society as they become older. The pieces are simply fragments, scraps, quotidian details, biographical and autobiographical moments, some ordinary and some extraordinary memories and feelings encountered by different older women as they move through later stages of life. The writing is an attempt to attend to them.

She sat in her favourite café, nursing her cappuccino, which was very hot and without chocolate. She liked the way the staff had become familiar with how she preferred her coffee. It somehow made her feel part of something, even a little bit known.

It was a mystery to her why people insisted on putting chocolate sprinkles on their coffee. That made it into a kind of pudding to her, and as second-generation Italian she did not find that habit at all in keeping with how she had learned to drink coffee. And what was all this drinking cappuccinos in the afternoon about? Never after 11 am her mother had taught her. She imagined these were transatlantic customs, ones she could cheerfully live without, along with a whole number of things about the modern world. Still, perhaps it was all an improvement on the ubiquitous Nescafe of her younger years.

The café was near the university, where decades previously she had been a student herself, so the clientele was mainly student based.  She had taken to coming there most mornings, partly to make sure she got out and spoke to people at least once a day, even if it was just to order her coffee.

She enjoyed looking at the young people, and marvelled at their beauty. She wondered if they knew that they were so gorgeous. She remembered never having been satisfied with how she had looked herself at their age, and wondered if in reality she too had been at all beautiful. She remembered her long, thick dark hair, and the shine it used to have, so different from that crinkly texture it had now, although she always made sure it was well cut. So maybe she had been quite attractive, although she had never felt it. She wasn’t now though, that was for sure! What a waste, to not have enjoyed all the gorgeousness of youth at the time. What she would give for it all now, the smooth skin, the hair, the ease of movement, that energy.

She always tried to elongate her stay in the café; to make it as long as she could possibly make one cup of coffee last. That was another thing that her Italian background had taught her; treat coffee with respect, enjoy it ma non troppo. She did sometimes think that British people might be a bit mad in the head to drink so much coffee all day and all evening.

As she left to make her way home, she saw that the pub on the corner was being renovated, again. Nothing seems to last long these days, she thought. The wide entrance doors and the signage above had been removed awaiting more modern replacements, and she had a clear view to the interior as she passed on the other side of the street. Peeling paintwork underneath the sign over the door was exposed and she could just make out the first few letters of one of the pub’s previous names, MEA. Ah yes, the Meadow Bar.

She crossed over and stopped to peer inside. It was all dusty from disintegrating bare plaster and was bathed in a strange orange glow from the temporary lighting the workmen were using as they stripped out the fittings from the wall. Their banging and drilling assaulted her ears, but she kept standing there, letting the sound of it slowly and rhythmically fill her body. She was unwilling and then unable to move, as if she were having some kind of dwam or absence.

The drilling noise slowly began to give way to the sound of a crowded pub, full of animated students arguing about the issues of the day; the miners’ strike, the three-day week, the hustings for the election of a student Rector. In the far corner she could just make out a glossy dark-haired young woman with a sallow complexion sitting elegantly on a bar stool, and being chatted up by a handsome dark maths student. Wafting around her she could smell the Nescafe he would offer to her when she agreed to go back to his flat for ‘coffee’, before a long night of lovemaking, their first of so many ahead.

Oh love
how do you get here
and why do you go?

Buds begin, wide horizons
invite everything, everything
to swell.

I am full and love grows
on the pomegranate tree,
deep in pinks and reds.

You are green
with slim feet
and all is sound

all is round in you,
Tending you,
I am true.

and you are gone.
Mounted,
astride and galloping

into deep, hot dark.
I age graceless,
fixed above ground.

I was not prepared for
being jealous of my son’s youth,
not walking fast any more,
the sound of my own footsteps.

I remember this –
the grinding of his head moving down
through my pelvis.

Arm yourself heart,
you are about to make a comeback.

Change does not come in a straight line,
it does not arrive perfectly imagined
as your head thought it would.

Reconsider normality,
think from within.

Experience can wrong foot you
that it may not all end,
let it in.

Low on funds, low on hope
your heart still pumps, and may yet
bring a blush to your cheek.

The woman in the choir has a fabulous big red and blue tattoo. It reaches a crescendo at her left shoulder, caressing her neck and leaving a trail of leaves and petals as it drops down her back.

She keeps forgetting she has dementia. She cannot speak but she can sing.

She vaguely knows that no one really knows her. Her nick name, her family. Her stories. Her years. She is not aware that age sits and looks at her, yet she can feel something pretty close by, waiting, like a reverse night watchman, keeping her in, not letting her out.

Singing together, side by side, keeps her in time. There are moments when she is momentarily no longer on song, but she keeps moving on, along with the tempo. Here, she can miss the beat, or there, and she remains part of the ensemble. Her fabulous big red and blue tattoo is still doing its thing, diminuendo over her shoulder and down the coda of her back.