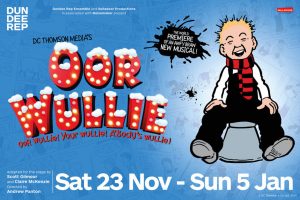 Dundee Rep Ensemble’s latest Christmas offering, in association with Noisemaker and Selladoor Worldwide, is Oor Wullie. A new musical directed by Andrew Panton, the production is an adventure filled with charm and laughter – all delivered in guid Scots, of course. Whether audience members have been reading about Wullie for eighty years, or are new to the town of Auchenshoogle, they are bound to leave a fan of ‘Scotland’s favourite son’.

The story is simple: Wullie, portrayed by a rambunctious Martin Quinn, has lost his bucket. His search to retrieve it will take him out of the pages of his comic and into the real world. Following him are a mischievous gaggle of familiar friends and foes. A new character, Wahid, played by Eklovey Kashyap, is also introduced, but this reviewer is reluctant to reveal the exact nature of his role, which the Rep was secretive about in the lead up to opening night. Suffice to say, through him a key message of the play is delivered in a way that is clear without feeling heavy-handed: Oor Wullie is for a’body, and so is Scotland. All of the actors bring a vibrant and infectious energy to this production, from Irene MacDougall’s side-splitting cameo as Teacher, to Leanne Traynor’s villainous Basher McKenzie, equal parts threatening and hilarious. Each character has a moment to shine, introducing and endearing them to less familiar members of the audience, while treating seasoned readers to the antics they have come to expect – and a few unexpected twists as well. Careful attention is also paid to costume and movement; characters from the comic are as expressive as their drawn counterparts, their movements often exaggerated to a cartoonish degree for comedic effect, and these to put the finishing touches on bringing the titular cheeky chappie and his compatriots to life.

No Christmas show would be complete without music, and the songs in Oor Wullie are all as extravagant as the rest of the production. The audience are treated to a selection ranging from classic showtunes,  a Bollywoodesque number, a parody of Chitty Chitty Bang Bang, to an 80s-style ballad from Wullie to his beloved bucket. Lively, catchy and humorous, every song is accompanied with tight choreography that makes creative use of set and props.

Indeed, in terms of set, props and tech, the Rep have certainly pulled out all the stops. Trap doors and removable panels allow Wullie to emerge from his own annual and explore modern-day Dundee, sneaking through vents and diving into skips. A gigantic bin lorry reverses onstage to herald the first appearance of Basher McKenzie while, later, actors holding composite parts of a saddle, basket, handlebars and side-car evoke PC Murdoch’s bicycle to much laughter. In the second act, we see Auchenshoogle itself, a town of bright colours and bizarre architecture – including lampposts that bend and spin in the wind  –  that does indeed capture the whimsical feeling of having entered a comic book. Basher  McKenzie’s lair in the Auchenshoogle Steel Works  is darker but no less fantastical, the villain taking centre stage on a platform piled high with towers of buckets.  Care has been put into designing the props: for example, some clever timing with wires allows Wullie to fire his catapult, including at one point to – what else? – knocking off PC Murdoch’s hat. The tech is equally innovative: projections allow us to see figures and panels being drawn in real-time, straight into the world of the play.

It is clear that Oor Wullie has been created with a great deal of passion, and a great deal of affection for the original comic. The result is an energetic romp filled with wit and heart. It preserves the spirit of the source material, while introducing new characters and timely themes that effortlessly bring Wullie and his friends into the modern day.