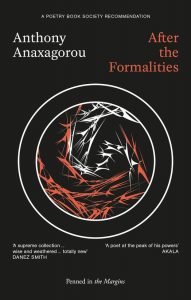 It would be easiest to describe Anthony Anaxagorou’s debut collection, After the Formalities, as one that deals with Big Issues. Racism, immigration, and trauma all feature large here. Add to this, as per the publisher’s blurb, ‘tracking the male body’, ‘the threat of violence’, and ‘global histories’. These are all appropriate things to write about, and the right things for the publishers to foreground in the hope of finding a readership. But to focus solely on these terms would be an erasure of the individual stories that concurrently inform and, at times, overshadow Anaxagorou’s poetics.

Perhaps it’s the shopping list of contemporary talking points at the outset of the collection. Mentions of Trump, Harvey Weinstein and Article 50 slot in uncomfortably among otherwise graceful passages. ‘Theresa May’ may scan nicely, but names such as hers are too loaded with paratextual meaning for an otherwise light structure to bear (‘Departure Lounge Twenty Seventeen’). Such a grasp at the current is tautological, especially when Anaxagorou is able to articulate his and his family’s stories, even those far in the past, with such immediacy.

Anaxagorou is British of Cypriot descent; a complicated position, as Cyprus is a place that is often ‘omitted’ from a ‘list[s of] Britain’s ex-colonies’; a name that, upon hearing it, his ‘Mates would say where?’ (‘Ecumene’). It is lonely to be placed at the fringe of the fringe of an Empire’s history, where one might only ‘[find] myself a murmur’, even in corrective post-colonial histories (‘Four Small Indiscretions’). Again and again, Anaxagorou recounts being asked about where he is really from, and such is the relentlessness of this line of inquiry that it sometimes seems he is asking himself the question.

But he knows the answer, even as a racist outside a KFC drives ‘his skull into [the narrator’s] like a belief’ (‘After the Formalities’). Indeed, this is the answer: a story of inter-generational trauma, tumbling from his grandparents down to him, that he maps out quite expertly. But is there healing in this? Possibly, possibly not. Put another way: does an untold story of survival, once told, become ‘myth or ganglion’? (‘Ecumene’)

Occasionally – as in ‘Uber’s’ seven pages of descending staccato breaks – Anaxagorou’s experimentation with form can subtract rather than add. Much more successful are the prose poems at the collection’s heart. In ‘Life Insurance’ and ‘A Boy Stood Still’, image-minutae stand in relief against traumatic memory, in a manner that is both psychologically accurate, but also hints at the possibility (perhaps inevitability) of coping, if not quite healing.

What makes After the Formalities stand out is its bravery, chiefly in its suggestion that intergenerational trauma may be interrupted– or at least, like a ganglion, lanced. But ganglions have roots, of course, and

Some roots
have been in the earth
for so long
they know only to call themselves earth[.]

The collection is also – if you’ll excuse this further bit of word-based free-association – an earthing. Peppered throughout are poems about – and, save for one, never explicitly for – his son. These genuinely tender and moving slices-of-life hint at the burden of trauma inherited from one’s forebears, and constitute a meditation on how to ensure trauma does not become an heirloom. The poet wants to ‘warn’ his son ‘about getting / attached to things already lost’, while remaining a protective and loving father (‘Things Already Lost’). Perhaps it is necessary to ‘pick cartilage from the ribs of our sorrows’, and perhaps too ‘a microscope’s lens’ is a ‘conceit’ (‘What the Lesser Water Boatman Had to Say’). If he sometimes unsuccessfully experiments with form – throwing things at hand and seeing what sticks – he successfully and more generatively does with approaches to catharsis.

Regardless, Anaxagorou has the ability to write with a grace that suits his smart, often delicate poetics. With increased surety of form and positionality, perhaps in his future work, his poems will further resist abstraction. In doing so, they will bear even clearer and firmer witness.