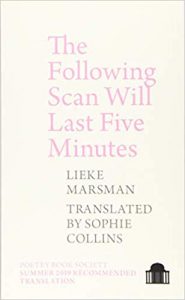 The Following Scan Will Last Five Minutes was written in the three months following Lieke Marsman’s diagnosis of a rare form of bone cancer at the age of twenty-seven. But there is nothing hasty or superficial about this slim volume which comprises poetry, letters from Marsman’s friend and translator, the poet Sophie Collin, and an autobiographical essay referencing Audre Lorde’s The Cancer Journals and Susan Sontag’s Illness as a Metaphor.

The title of the book refers to an MRI scanner with an automated voice that announces the duration of each scan. Many of the poems share the book’s title, with the time the scan ‘will last’ decreasing to four minutes, then to three, culminating in two poems entitled, ‘The Following Scan Will Last Less Than a Minute’. The repeating titles create a rhythm throughout the book – urgent, insistent and expectant. Incantatory, like a spell or chant, they accrue new meanings through repetition, a reminder of the transience and fragility of life, and are a metaphor for Marsman’s meticulous eye for detail as she observes her experience of cancer layer-by-layer, creating a picture of each layer.  ‘No matter how much support you get from those around you, cancer is, like every other disease, a very lonely experience.’

With a life-affirming spirit, which closely echoes that of Audre Lorde, Marsman recognises that when touched by cancer it’s the ability to understand our own needs and satisfy them that creates freedom from the rigors of the disease.

To be free is to need some fresh air
And to be able to get up and go outside[.]

Marsman writes with humour and honesty and shares her thoughts in a conversational manner. Her poems are mainly in free form, sparsely punctuated and written in a spirit of companionship and generosity. We are drawn in and experience, as far as is possible, what it feels like to be touched by cancer. We are left with an impression that we have been there, vicariously, and that Marsman has given us this knowledge as a precious gift – in case we might need it at some stage in our lives. She writes, ‘I had to write about politics in order not to be totally subsumed by cancer.’

Marsman contextualises her illness by exploring many aspects of contemporary life – the politics of the Dutch health system, social, health and gender inequalities, the environment, the art of translation, and as a committed believer in multiculturism – the need for empathy and friendship between all people.

She writes frankly about being frightened, vulnerable and depleted:

You no longer have the strength to collect the small change
you get for recycling bottles at the supermarket.

But there is no self-pity, Marsman translates vulnerability and fragility into autonomy, strength, and resilience. Being faced with a potentially life-threatening illness brings fresh insights and an appreciation of the small things in life which, when we are in good health, we so often take for granted,

two people in a
car magical!

Tying your
own shoelaces
the stuff of poetry!

Susan Sontag drew attention to the ‘battle-like’ language and metaphors that are often used to talk about cancer. In her essay Marsman discusses the inadequacies of language when we talk about serious illness and her own response to the oft-quoted phrase, ‘the fight against cancer.’

But what else am I supposed to tell myself in the morning? ‘Come on then, time to passively undergo everything that comes your way, just sit back and wait to see what the doctors and more importantly fate have in store for you?’ I need an illusion that I can influence my illness and recovery process, and so I tell myself that this is a fight. Is this unfair to those who did not survive the battle with cancer?

This is a treasure of a book, uplifting and courageous, with many of the qualities of a trusted companion; honesty, humour and empathy.