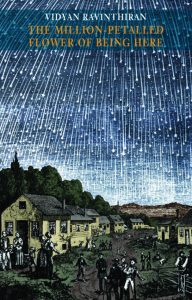 By its nature, as the waters of the Ocean, the extent of heaven’s bliss cannot be defined. But the sphere of human happiness is like a dew-drop clinging to a blade of grass.
Vidagama Maitreya, Budugunalamkaraya (‘Beauteous Virtues of the Buddha’, 15th century).
Epigraph taken from The True Paradise, Gamini Salgado.

Reading and re-reading The Million-petalled Flower of Being Here, Vidyan Ravinthirin’s sonnet series dedicated to his wife, Jenny Holden, I feel privy to his most innermost thoughts and feelings about living and loving in England’s North-East and Midlands; an energetic fusion of colour reflecting the cultural nuances of a poet writing from the heart, and head, of one with Sri-Lankan heritage growing up among the ‘zinnias’:

Waist-deep in zinnias by the window,
one cradles the other. The photo’s
black-and-white, faded, seems oddly Victorian
[…]
Souls touch only
as stems and petals are half-perceived
through a sari’s silk.

His lines do not echo Shakespeare’s or Donne’s; rather his sustained accomplishment lies in the way he keenly manipulates this most sentient of poetic forms with family lineage sensed through a distillation of images and incantatory sounds:

world’s harms haunt the child in her mother’s arms.
We look and look until we almost feel
the past’s no foreign country after all.

Capturing the modern-day lyric, he embodies it and in so doing emboldens it, gilding it with a candid light, a personal voice, dew-drops, and in his capture evinces the tones of the everyday, the quotidian. Paradoxically, I sometimes struggled with these tones, his narratives of ‘In the bubble/ – the echo chamber, the centrally-heated sump’, as one might a refrain of things sounding, more or less, the same ‒’The X-Files’, ‘Contrarieties’ of Blake and Blake, ‘Daniel and William’ with mordant conscriptions of ‘Some to misery are born ‘. Yet, it’s those same chords and discords, that verisimilitude, this constancy that brings us to a clearing, an open space in the imagination where ‘The vent’s cool air touches my face/ and (sting) forarms, lightly as your kiss’, (‘Driving’). But let us not mix metaphors, or at least not woefully, these sonnets are of the blood and brimful boast of what circulates in the Willis of his poet’s mind:

These thoughts of loneliness, and of difference, are intensified in ‘Dubrovnik’ when swimming in the sea reminds the poet of being caught as an infant in the perceived animus of a hungry riptide,

the tide licked icily up and over
my bitten legs in the sun-smitten sand – my mother,
hating it, snatched me away before
I was pulled in and under and lost forever […]

in contrast to his wife’s ease in the water passed on from a mother who took her daughter swimming. In ‘Outside the Hanuman temple’, the poet offers an insight into what it is like to be a white face in Ramboda

No one there, including me, looked like you
so they looked at you, mingling
swift glances and that shameless, long,
unbroken stare. It’s shameful that I didn’t notice
what it was like for you in that place.

a reversal of what Vidyan experiences ‘in (the) northern city’ he shares with his wife.

Happy are they, who live in the dream
of their own existence, and see all things
in the light of their own minds
[…]
The world
has no hold on them. They are in it, not of it.
(‘Hazlitt’)

This fine collection of sonnets is definitely in this world and as such impress on the reader the poet’s sense of engagement with it.