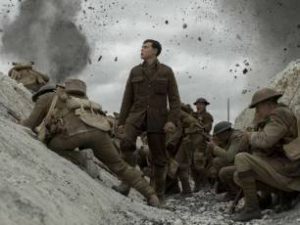 In 1917 Sam Mendes has created an astonishing work of cinematic art through the masterful combination of continuous, single-shot cinematography by Roger Deakins; concise, effective screenplay co-written with Krysty Wilson-Cairns; and haunting, dramatic score by Thomas Newman.

Mendes’ direction in this film is intense. His use of long takes and clever editing bring the viewer into ‘real time’ so that the film appears as a single continuous shot, following in the footsteps of Hitchcock’s Rope (1948) and Scorsese’s Goodfellas (1990). Mendes himself employed the technique in Spectre (2015) but in 1917 the application of this method reaches new heights as Mendes plunges us straight into the hell of the protagonists.

The film tells the story of two soldiers, Lance Corporals Blake (Dean Charles Chapman) and Schofield (George MacKay) who are tasked by their General (Colin Firth) to avert the slaughter of another 1,600 men, including Blake’s own brother. Blake is asked to take someone with him before the mission is explained, and volunteers Schofield, who faces the quest with trepidation asking his comrade directly, ‘why me?’.

There has been a rise in interest by film directors in the history of the First World War since the centenary marking the end of the conflict. Peter Jackson’s extraordinary documentary They Shall Not Grow Old (2018) brought the naivety of the general population of the early 20th century, and their false levels of hope for a short and glorious war, sharply into focus. Danny Boyle helped build our collective memory of the callousness of this war and the heroism of those who volunteered, fought and died for the country through his large-scale memorial portraits on coasts throughout the UK on Armistice Day, 2018. Sam Mendes builds on this momentum, using the basis of his grandfather’s recollections as a runner, for the plot of 1917.

Newman’s score adds drama to the action, building an emotional reaction within the viewers as we experience the shock and horror at critical points. MacKay evokes in Schofield’s character the same pathos he brought to Pride (2014) and the melancholy of How I Live Now (2013), portrayed through his gut-wrenching expressions.

The lance corporals become moving targets in broad daylight, crossing over the line into enemy territory. The audience is dragged into the landscape by the buzz of flies around horses’ corpses and the scuttle of rats over dead bodies whose faces are eaten away. Daytime scenes contrast with Daliesque moments wandering through a bombed French city, where the town fountain stands like a glowing cross against the burning backdrop of silhouetted ruins. Ghostly visions through deserted battlefields stress the confusion of war, and the fear and apathy of officers, raising viewers’ awareness of the wretchedness and futility of the barbaric strategies deployed, with images reminiscent of the eerie river settings in Francis Ford Coppola’s Apocalypse Now (1979).

21st century cinema can sometimes be seen as full of superheroes and CGI action to engross audiences and transport them into different worlds. Mendes recreates the world of the ‘Great War’ itself, demonstrating the comradeship and heroism of human beings when faced with unspeakable adversity and the solemn fact that there is no need for imagined superheroes and villains when humankind has both in tens of thousands.  We could have been there with these soldiers. We could have dodged the bullets they did, witnessed the evil they saw, felt the compassion they were shown; such was the power of the screenplay and the ‘one-shot’ direction. Mendes has brought the suffering of a lost generation straight into the hearts of 21st century viewers, lest we forget.