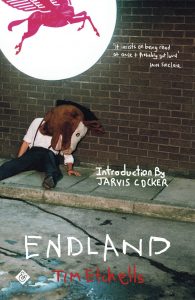 Everything seems to be going wrong in Endland. Gods are being banished from Olympus and forced into dead-end jobs, a teenager vanishes after she uploads herself to the internet, and even the space-time continuum is in danger thanks to two alcoholic, quantum physics enthusiasts. It is a place of abuse and negligence, and all its inhabitants share a tendency for misfortune.

Tim Etchells’s Endland is a collection of short stories, set in a land where the fantasy and surreal do not alleviate deprivation but emphasise it. It is a world parallel to ours, where Kim Kardashian is a renowned painter and ogres manage local pubs. The collection is also a cynical commentary on the stagnation of the British social climate yet its earliest stories, written in the 1990’s, seamlessly blend with the most recent ones. The only permanence in the book seems to be the inaction of social services and the general chaos, which permeates the country. However, Endland isn’t so much a social critique as an attempt to present poverty and crime without pathos.

As the stories unfold into their mythical, fever dream plots, they urge the reader to reject the typical and customary way in which we think about the most impoverished parts of society. The strangeness we experience from its fantastical elements allows us to look from a distance, without assuming an understanding of the characters’ situations. Twists like divine intervention, allowing a woman to get her revenge on her ex-boyfriend, work to illustrate the randomness of good and bad fortune.

Endland also forces us to reconsider our own motivations for taking an interest in stories of social deprivation. The narrator taunts intrusive readers who would simply seek excitement and gore from his tales. Many of the stories end abruptly, and the reader is encouraged to focus on feelings the stories inspire, rather than a solution or explanation to what has happened:

On the next day she was taken once again to tell the futures of the captive but the outcome of that meeting is itself murky and opaque, lost in the passage of time, unknown to the poets and in any case not recorded in any version of her tale.

While the subject matter in Endland might seem daunting, brutal humour prevents it from becoming monotonous. At the same time, this humour allows us to connect with the characters, though it is often used to dismiss and conceal their troubles and therefore serves as another way in which these are trivialised. It is for the reader to figure out the true implications of events. While we might predict that most of the stories come to pessimistic conclusions, Endland’sgreatest achievement is that we never become desensitised to them.

Etchells’s theatre and performance background is apparent in the language used, which focuses on the oral and vernacular aspects of speech. Each story is an experiment with form. The narration is a mixture of spontaneity and restraint, which adds an almost paranoid tone to the book. Phrases become copyrighted, crossed out and interrupted, and these alterations give the impression that the writer was under surveillance by an all-seeing regime.

Endland is a bold experiment because it undermines itself, its narrator and its readers. With his constant manipulations of the text, Etchells succeeds in extracting the unfiltered and instantaneous feelings of poverty, without basking in it or trivialising it. His stories urge the reader to take in ugliness and despair, to notice the beauty that thrives despite it all.