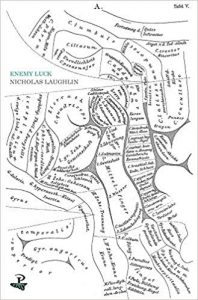 I was firstly struck by the cover of this rich and densely packed collection by Trinidadian writer, Nicholas Laughlin. At first glance, the cover, simple black and white, crammed with text, looks similar to an old topographical map – lines marking out regions and boundaries. A closer look at the text and an explanation at the back explains that the cover is actually of a region of the brain taken from a late 19th Century diagram.

Before reading the Enemy Luck I looked, as you do, at the back cover for a sense of what I could expect of the contents that lay within its pages. Laughlin uses an epigraph from 18th Century poet Christopher Smart, who was ‘incarcerated in the madhouse’ for many years, to form his own stance on poetry and craft a unique style. Equally, the collection is described as ‘almost an encyclopaedia of ingenious devices and other forms.’ These make Laughlin’s collection engrossing, inviting the reader to puzzle over and explore its pages repeatedly. After an initial reading, what came to mind was not that I had read a collection of poetry, but experienced a poetic histography. Enemy Luck contains not only arresting verse, but images and cut-outs of texts which make the collection feel much more like an artist’s journal or workbook.

Divided into six distinct parts, each with its own characteristics and personality, Enemy Luck, has a lot to offer. Strangely enough, when I reflect on this collection, it is not the traditional verse poetry that stays with me, but the other forms. Threaded throughout the collection are single pages of prose which can be read as independent fragments or considered within the wider  work. The first two of these, ‘The Stranger’ and ‘The Uncle’, appear as prose poems. There is a quiet simplicity to these where Laughlin leaves the reader grappling with paradoxes and uncertainties. In ‘The Stranger’ the narrator and his friend return to a house ransacked by a stranger; upon questioning the man, the pair learn that they had in fact invited the stranger to the house. On the next page, in ‘The Uncle’, the narrator encounters another stranger: his companion’s ‘uncle’.

Laughlin clearly enjoys playing with established forms, stories and culture. In the third portion of the collection, Laughlin turns his attention to the existing mythology of the ancient Greek god, Hermes. In Enemy Luck the deity is personified as a cousin and a character that the narrator has a close connection with. There is much to enjoy in this section ─ the play on established proverbs in ‘Cousin Proverb’,  ‘A bird in the hand/is already meat’,  the contemporary interpretation of the Greek god with the use of popular culture references in ‘Hard Luck’:

‘I’m the archbishop; heads the needle,
tails the ice,  “these are not the droids
you’re looking for”; define a one man job[….]

This is not the only time Laughlin pays homage to the roots of his chosen art form. In the latter portion of the collection, the poet’s tributes to French poet Arthur Rimbaud and Horace’s ‘Ars Poetica’, using excerpts from the former’s letters, create thought-provoking work.

For those more traditionally inclined with their poetry, Laughlin has plenty for you too. Under the packed and often puzzling features of this collection are beautiful motifs and imagery threaded throughout. Time and again, we read of gold, the colour black, references to nature and birds. In ‘King of the Bands’ the poet’s decadent lines contrast sharply with the plain nature of poem at the beginning of the collection:

A pearl under each tongue, and a lozenge of gold,
and a whistle of honey.
A beard of cotinga feathers, green as a birdsight,
and a bib of flamingo scarlet as his nipples.

Enemy Luck is a challenging read but is not without its rewards. Laughlin captures the essence of a ‘madhouse’ within which, readers are told, the poet Christopher Smart was incarcerated. This collection refuses to settle but is all the better for it. The range of styles and forms is expansive and varied but what remains consistent is the quality and ingenuity of the poet’s work.