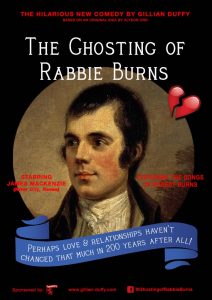 The unexpected element of Gillian Duffy’s The Ghosting of Rabbie Burns isn’t that the two-person play successfully delivers a complete and compelling dialogue. Nor is it the fact that the jovial tone detracts not from the deeper issues of love and commitment. Rather, what surprises most is that Duffy manages to create a fully engaging and entertaining piece of theatre, commenting on the trials and tribulations of budding romance in just over one hour. The brevity of this compact play contributes greatly to its charm.

Duffy’s two characters, Emily Winters (Alyson Orr) and Rabbie Burns’ ghost (John Kielty), meet in a house in Ayrshire, to where Emily has fled to mend a broken heart. When Emily, alone, rhetorically requests a new man, she doesn’t anticipate that the ghost of Scotland’s greatest bard himself will impose upon her evening. Burns’ arrival kick-starts a quick paced dialogue packed with―actually very funny―puns and lewd wit. The energy of the play lies in the incessant sparring of Emily and Burns, as they battle to convince each other of the challenges their own sex face while playing the exasperating dating game. The formidable subjects of love and relationships are skimmed over with a light humour, as the focus remains on the enduring, funny, desperate and essential process of courting. The audience is entertained throughout, giggling and absorbed in the banter of this one-hour romp, as the humorous exchanges between these two strong leads transports us back to our own dating disappointments.

John Kielty’s full-bodied performance as the bawdy, raucous, sometimes sleazy but instantly forgivable Rabbie Burns, is naturally comical, his cheeky chappy exuberance endearing from beginning to end. Kielty’s effervescent enthusiasm does not overshadow Alyson Orr’s Emily, who complements Burns’ infectious optimism with a measured and clear, quick-witted and feisty performance. Orr flawlessly delivers the different layers of Emily, natural in her comedic timing but also tender as she tackles the script’s more sober moments. Duffy’s play relies on the interaction between the optimistic Burns and the cynical Emily, and thankfully, the two actors present a vibrant and energetic chemistry, allowing the audience to feel safe in their hands. However, an hour of these animated rants was enough― any longer and both characters might prove a little irritating.

The jury is out on the references to Wikipedia and the Cloud in the exchanges, which seem perhaps unnecessary and intrusive, but the verdict on Gillian Duffy’s script is that it is guilty of rom-com excellence. This is a play in which dialogue is paramount, and just as well as The Ghosting of Rabbie Burns must successfully hold its own despite a basic stage set-up and uninspired lighting. The dialogue remains amusing and buoyant throughout, but with the inclusion of some of Burns’ most tender laments, beautifully sung by Orr and Kielty, the audience is momentarily privy to the lingering depth behind the play’s frivolous focus. What is clearly represented in the play is that the quest for love, through courtship and romance, and the disappointment of unrequited love, are as universal and timeless as they were when Burns was living his best philandering life.

But while we take away a confidence that the provocative subject of Duffy’s play, and the witty banter that’s commonly endured (and possibly enjoyed) between romancing couples, will remain the same for years to come, what struck me most when attending The Ghosting of Rabbie Burns at Dundee’s Repertory Theatre, was the predominantly (older) middle-aged audience. Where were the younger generations and why, when the play speaks directly to youth as they currently navigate the online dating scene, did Duffy’s play not attract a less silver haired audience? Is it possible that Burns, our national treasure and Scotland’s greatest cultural export, is in danger of being forgotten? Duffy’s brilliant, compact commentary on modern love would suggest that our finest Scottish poet is just as relevant today as he was over two centuries ago.