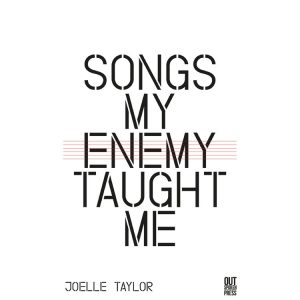 I carry the war in my womb.
At night it kicks and sings stories of the
first night that war came calling.

In the first lines of Songs My Enemy Taught Me, Joelle Taylor sets the reader on a journey that begins with her own early experience of abuse, and travels across the globe into the lives of a diverse cast of women, each with a story to tell.

These wrenching, visceral tales are driven home with the rhythmic energy you’d expect from the award-winning slam poet and founder of the youth mentoring programme SLAMbassadors. You’ll hear these lines spat from the stage as you read,

see the child tap dance in a gilded bird cage
see women flicker like neon lights
see a girl catch a bullet in her teeth. and swallow.

But slick and punchy as they are, there’s no rushing past the poems in this collection. Instead of reading cover to cover, I had to lay the book down after reading every poem, unsure if I was trying to absorb the poem’s meaning or protect myself from doing so.

The fruit from the killing fields has deep roots and flesh the taste
of surprise.

There are certainly passages that have the potential to retraumatise; people with personal experience of violence or abuse should tread carefully through this collection. I found myself wondering at points if the bloodied imagery floating uneasily between metaphor and forensics sometimes went too far. But as Malika Booker writes in the blurb, ‘This collection asserts that poetry is here to do work’. Harrowing moments are evoked with sensitivity and purpose to break the silence of injustice. Although painful to read, it is no sensationalism at work here but resistance. It is not the poet who goes too far, but the enemy who taught her the songs.

The collection is divided into three sections, starting with ‘Songs of Silence’, travelling to ‘Songs of Uprising’ by way of ‘Songs of Survival’. The progression between these three stages is subtle—you’ll find no cheery endings here; the tension holds throughout—but the loneliness of silence: ‘a girl plays house in a deserted city / performing voices of the gone’ slowly gives way to the whispered polyphony of uprising:

You will hear it.
and you will sing[.]

In the research for Songs My Enemy Taught Me, Taylor led a series of masterclasses for women in settings including prisons, refugee camps and domestic violence shelters. Although the majority are Taylor’s own poetic interpretations of the stories gathered in those workshops, the opening poems in the final section are written by Afghan women in the form of the Landay, a traditional folk chant from their homeland, described by Taylor in her introduction as ‘one of the most extraordinary forms of spoken word, a hummed resistance’.

Darkness drops across the open mouthed world
The sun has turned its back, faced away in bitter shame ̶̶ Basira Heemat.

In showcasing these defiant poets and their heritage of resistance, Taylor becomes an example of what her collection calls for. She is a conduit for silenced voices, using her own creativity and status to uplift and connect with others, setting out not from a place of detached altruism, but from her own experiences of silence, survival and uprising. And it is this, I believe that gives this collection its weight. Songs My Enemy Taught Me is a lesson in solidarity for both activists and creatives, especially those who aspire in some way to both. Take your time with this book, but do not look away.