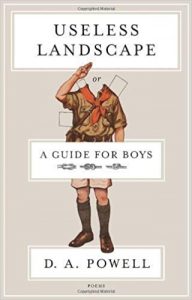 I can only give you back what you imagine.

(‘The Fluffer Talks of Eternity’)

It’s true, every poem in Useless Landscape gives the reader only what they can imagine. However, in reality Powell gives his readers anything and everything they can imagine. Across its 100 pages, this collection surprises the reader at every turn of the page, refusing to submit to boundaries or expectations, and with surgical precision dissecting its images, stories and sounds.

Useless Landscape, or A Guide for Boys is D.A. Powell’s fifth poetry collection and has been awarded the National Book Critics Circle Award in Poetry. He has taught at Harvard University, Columbia University, and the University of San Francisco.

Powell’s passion for stories is evident across the collection – he tells each of them with effortless poetic flair but also carelessness, as if it was some kind of game. There’s no regularity, no way to predict the structure or the topic of the next poem. Yet one common element underlying the collection is Powell’s absolute devotion to evoking beautiful descriptions even when his objects are perfectly ordinary.

Remind me to tell you about the sculpted figures
an eye can devour, the imperfect laws of gravity
and the imperfect ceiling, the hot stone floors.

(‘Dying in a Turkish Bath’)

The way Powell builds his metaphors reminds me of painting. In fact, many of the poems have landscapes in them. In ‘Landscape with Figures Partially Erased’ he writes, ‘These bodies: their contours uncertain. Just a general cast to the light’ appears as the last line of the poem, and precisely where the painter finally decides to shed some light on his landscape. Previously it was painted in complete darkness, for he started the poem with:

First, it’s just the faces disappearing.
Because, deflected, as the faces long have been,
with their hunched trunks
and mercilessly twisted necks,
they can only be regarded from a ground’s-eye view.

With every stroke of pen, more details appear on the page, with every such detail, less of the faces can be seen. Clever turns of phrases are Powell’s signatures, as in ‘Outside Thermalito’:

Persimmons ripen with the first frost.
The bitterness inflicted on them
takes their bitterness away.

Many of the poems contain tongue-in-cheek lines concerning topics as common as ageing or bodily dysfunction and ideas as big as love:

Love, as a song, is sorry enough, without its equally sorry singer.

Love, when it’s truly sorry, is sorrier than a broke-dick dog.

Among the collection’s many themes perhaps the most striking is the nostalgia associated with homesickness and lost childhood. Seemingly simple lines cluster into a song of the days long gone. In spite of mentioning details relating to someone else’s life, the past’s void pulls in every reader’s memories equally strongly:

My father’s fields are far from here.
I shot my share of blackbirds there.
Drove a harvester in summer.
Gathered plums.
Gathered chums.

Apart from using evocative metaphors and robust descriptions, Powell also plays with the structure of his poems. ‘Seven Sketches for a Landscape, Unfinished’ gives away its entire structure in the title. Split into seven short parts, the poem tells stories of injustice, juxtaposing those in power with the powerless. Having told six stories, Powell turns to the reader, fulfilling the titular promise of the poem being unfinished:

Useless Landscape, or A Guide for Boys is exceptional for its variety. It is sure to surprise the reader even after several readings of every poem. Mixing darkness with humour, Powell establishes himself as a poet who ventures beyond the conventional boundaries of what language is expected to achieve. As if words were child’s play for him, he bends them in new ways, and trading his pen for a brush he paints a new story with every page.