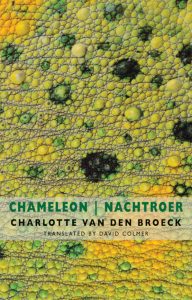 Reading Charlotte Van den Broeck’s recent Bloodaxe collection makes it clear to the reader exactly why she is acclaimed as one of Europe’s most innovative and original new voices in poetry. Her first English-translated poetry collection, Chameleon, was published in 2015, followed by her second poetry collection with the untranslatable title; Nachtroer in 2017. Chameleon | Nachtroer sets the two collections afloat, travelling through ocean waters and building boats. Translated from Dutch, David Colmer maintains the informal tone of the poems:

On the island a woman reaches out
for the suspicion of an elsewhere.

who holds it in her fingertips the exact same way,
a filament that, somewhere inside of her,

sets off a longing for a remote place[.]

In simple, accessible words, Van den Broeck suggests strong feelings of love and loss even as the ‘she’ changes from a girl to a woman. Just like a chameleon, she transforms and adjusts. With long, structure-driven sentences that manages to keep the same construction through deep explorations, Van den Broeck emphasises entanglements in her examination of identity and reflects on what it means to be female, drawing from memories, landscapes, and language.  In her poem ‘Winter Veg’,

Her hands are chicory, pulled
fresh from the ground.

The green imprint of the scant light
still showing around her wrists.

I learn a second language
in which sighs are nouns.

The recurring structure underlines the inaccessible world where poetic thoughts take place. The couplets allow space between the words, pacing the poems through the rhythm they create. The use of chicory metaphor adds a delicacy, and natural calm, which is contrasted with the action of pulling it from the ground.

A similar structure is also visible in the second collection, Nachtroer. Here the poems are poignant even piercing as the speaker goes through a heartbreak whilst dealing with insomnia, desiring to disappear. Instead of rendering the majority of the poems in couplets; however, they are often in longer, sentence driven poems. The imagery in the poems is often physically focused, tied to different places as considered in ‘V’:

Czechs and distance that repeats itself
The way that we for years now, unwittingly but doggedly, have been repeating ourselves
Vienna becomes our living room, the Danube a pinched nerve, even love-making
tedious in the dry heat.

The descriptions of repeated actions tied to European places emphasizes pain connected to the concrete action of lovemaking in these locations. Instead of the excitement of exoticism or romantic intimacy, such listings become emotionless action―like brushing your teeth or driving a car. Even the remarkable becomes commonplace, jaded. Van den Broeck’s inventive use of metaphors in a simple line draw the reader into the intense emotions of heartbreaks and isolation.

In Chameleon, thinking and feeling are interwoven, while recognizable images threaded through, intertwined with a fast tempo, evoking suffocation. Dense poems are contrasted with the slow rhythm of Nachtroer, as if the speaker might now breathe between isolated poems:

Take me with you,

The reader drinks the poems greedily, but thirst is not fulfilled in Nachtroer, in her open, unfinished poems. The book ends with the poem, ‘You’d Like to Build a Boat’, yet the she does not know where to go:

the boat is now ready
where to go?

Thus, the book emphasises the effect of heartbreak: it does not have a set finishing line.

The two collections complement each other greatly in this single translated volume: Chameleon with its theme of identity from a girl to a woman, followed by the consequences of a breakup after a long-term relationship in Nachtroer. Charlotte Van Den Broeck exposes the chaos of her inner feelings in a manner that makes the feeling of being lost universal.