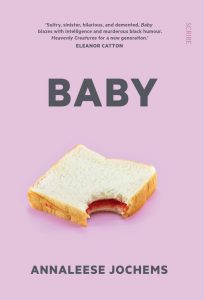 There is something almost unbearable in the experience of reading Annaleese Jochems’s debut novel, yet at the same time Baby is utterly arresting, oozing with sex and tension in a sickly-sweet package.

Nothing embodies this concept more than Jochems’s protagonist, Cynthia. At first, she appears to be a sheltered, childishly naive young woman. Nevertheless, Cynthia drags those around her into a web of obsession, secrets and scandal. It is this sense of inevitable disaster that makes Baby a book that is both difficult to read and impossible to put down. Tension lurks even in a description of dinner, where Jochems’s use of synaesthesia – evoking the scraping of a knife with repeating ‘s’ and ‘c’ sounds – worms its way under the skin of the reader as surely as it does Cynthia’s guest. The curt dialogue accompanying the scene is fittingly passive-aggressive:

Dinner is canned peas, canned corn and more corned beef. It looks nice and tidy, all scooped out in sections on their plates. […] She sections her foods off from one another with careful scaping movements of her knife. Gordon tells her to stop, and she finishes the corn, then she does. The peas roll a bit, but the water’s okay tonight, so not too much. She puts one between her lips, a pea, and holds it there a moment. She sucks it back in and says,

‘Will you wash your hands, Gordon?’

Cynthia herself is directionless: mewling, moody, entitled, obsessed with reality TV and her body weight, with a near-pathological aversion to responsibility, and the only other creature she exhibits any empathy for is her dog. In other words, she is the nightmarish embodiment of every criticism levied at millennials and their younger Gen-Z kin. There is comic potential in such an exaggerated character, but before the joke can begin to run thin, Jochems takes Cynthia and the reader down a far more sinister route. As a thriller, rather than a dark comedy, Baby truly shines.

Ambiguity and claustrophobia close in on Baby, the titular boat upon which Cynthia has run away to live her ‘dream’ with her French bulldog and her personal trainer, Anahera. Is Cynthia a spoiled, lonely rich girl, desperate to find meaning and human connection in her increasingly bleak reality, or a manipulative sociopath? Is her obsession with Anahera based on love, lust, or a fearsome possessiveness? The constant, perilous creaking of Anahera’s weights in the cabin loft reflects the tenuous relationships of the boat’s occupants – especially when the hulking Gordon arrives, and he and Cynthia enter a struggle for both Anahera’s affection and the only bed. The volatile scenario is resonant of Jean-Paul Sartre’s No Exit, where hell is other people and no one will let themselves leave. Jochems adds plenty of sex, skinny dipping and skimpy lingerie, but also coco-pop strewn mattresses, fat rolls, eyebrows in need of plucking, sun stroke, broken toilets, and bottles of piss at the dinner table. The reader is confronted with the grotesque nature of the human body and the harsh reality of boat life – two of the many truths Cynthia refuses to accept, as she deceives not just those around her, but herself above all.

The result of this heady mix of lies, bodily fluids, and power struggles is a gripping novel. Full of dry wit but dripping with darkness, it sticks in the mind, demanding to be read and to be remembered long after. It mainly achieves this through its cloying and attention-hungry protagonist; a complex character who is tragic in her isolation and self-delusion but nevertheless holds a quiet, menacing power of her own.