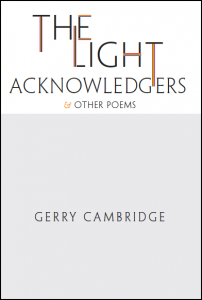 Gerry Cambridge, nature photographer, essayist, editor and award-winning poet, journeys the shifting landscapes of life from Arbroath to Glasgow, youth to middle-age, natural and domestic, in this, his eighth poetry collection. His meditations on regret, loss and acceptance (among others), are captured with his characteristic photographic precision, and rendered sharply by the elegance of his own typography.

Cambridge alludes to the influence of Walt Whitman in The Light Acknowledgers. Light, as enlightenment, is the metaphysical conceit at the heart of this collection, which is paced in six sections, the first of which is entitled ‘a box of light’, and directly resembles the design of the book. Poems riff on poems, while some are companion pieces to Cambridge’s debut collection, The Shell House.

The opening poem ‘From A Stopped Train Outside Arbroath’ sets the tone with the ‘astonishing’ observations of the speaker (Cambridge) during a moment of pause, juxtaposed with the movement of light:

on every attentive
or uninterested eye.

On the following page ‘The Nature Photographer’, elegantly contained (as many of the pieces are) in two stanzas, remembers the narrow focus of youthful self-absorption:

obsessional eighteen[…]
neck-cricked for the perfect angle, […]
in the small bright rectangle.

The musicality and hue of the ‘skinkling rainbow’ later in the poem (the Scots word, directly untranslatable to any single English word, adds joy to imagery that would otherwise seem faded) projects this exuberance. There’s a change in tone in the second stanza; a refrain that echoes throughout as the speaker identifies the naivety of his younger self and the trials ahead:

I pity that young man
uncertain of his home[.]

The final line, a statement, a coming of age – closed, period: ‘When life was Kodachrome.’

The titular poem is a synesthetic show of light, colour and sound. Although some of the mathematical references were lost on me, the arrangement of words in the shape-creating chiming lines the message was not. Neither was the contrasting darkness of the small epitaph signifying the shortest day:

the light mill on the mantelpiece, in its
tilted parallelogram[.]

Hear the ‘rainbow maker’, the colours stretched with asyndeton, the line drawing the eye to the beauty of the celestial spectre hanging on the enjambment:

[…] more dazzling
than anything of winter Earth.

Consider too, how the reader ‘sees’ the elements in the traditional, celebratory dance, ‘whirring’ and ‘birling’, that adds an energetic dimension to the lines. Yet light is in constant flux and rainbows are temporary.

Cambridge employs formal metre in ‘The Visitor’, a five-page idiomatic monologue, comedic but for the space between nine stanzas that give pause to absorb the dimming resonance of a light doused, and a painful outpouring: ‘yer getting a different side ae things the nicht’. The distress and sadness of ‘The First Ring’ is beautifully observed as ‘the little ghost impression/is fading from my wedding finger.’

‘Easter Saturday Night in Glasgow Central’ is a celebration of the ‘[…] city of festival/built on the dead.’ The poet delivers a ten-poem sequence of transcendental insights, packed with simile, metaphor and humorous zoomorphism:

And who is he, the older man […]
Dapper. What are his thoughts as he steps
Nimble as a redshank

Insight does not come without self-recrimination. The chanting consonance of ‘Billy Blaney […] snottery and blubbery/’ in ‘Wish’ wiped the smile from my face. We have all encountered him at some playground in our lives.

The concluding poem, ‘A Birth’ resonates, echoing with the heightened awareness of the first as ‘Dragonflies were hatching/’ and ‘drawn by the light […]’ as new beginnings are perceived:

I felt the thrill
of a further life
I could not have imagined[.]

I see – now – what to do with ‘the gift of unearthed clarity’. Arguably, this is the gift of the whole collection.