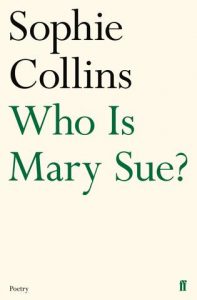 I first encountered the pejorative term ‘Mary Sue’ in a critical review of Samantha Shannon’s Bone Season and can still recall my bemusement; Shannon had secured an impressive seven-book deal with Bloomsbury yet stood accused of creating merely an idealised projection of herself. It is this gendered injustice which Sophie Collins now examines in her experimental debut, Who Is Mary Sue?.

Building on a poetic career which includes translations, editing collections, and commissioned work, Collins offers an inventive exploration of the social dismissiveness of female creativity and women’s right to claim the narrative ‘I’ in fiction writing. The result is a purposeful assemblage of prose fragments, quotes, interview excerpts, and original verse, which defy easy categorisation as a poetry collection, but have been variously described by the author as ‘hybrid poems’ or ‘lyric essays’.

Following an extended preface comprised of words, poems and an image of the Greek muse Euterpe, the title section ‘Who is Mary Sue?’ charts the emergence of the term in 1973 to discredit fanfiction, and how it has since become shorthand for undermining all women’s fiction – ‘an unwitting embodiment of the double standard of content’. The symbolic inclusion of blank pages directly after the observation that ‘fear of creating a Mary Sue may be restricting and even silencing some writers’ is more unsettling than many of the poems that follow. The lessons we absorb by seeing other women’s work dismissed become embodied in the words we never write.

The collation of interview excerpts thereafter is similarly shocking, and evokes a stark sense of inequality being laid bare:

Is the unnamed narrator of nineties actually called Lucy?

The narrator’s name could be Lucy, but her name is certainly not ‘Lucy Ives’, or at any rate she isn’t me […]

The provocation feels deliberate, a way to raise the hackles of readers, presented within an essayist piece as factual commentary on the way writing is received and appraised. By following this with free verse, Collins blurs the boundaries between real and imagined reporting of misogyny, doubling down on her assertion that female creativity is viewed as limited to domestic and personal experience:

I thought again and again about the curdled smell and texture of disposable nappies, though
I’d never touched one.

Collins uses the collection’s few structured pieces of poetry to develop her critique through allegorical means. Having shown that women’s writing is unfairly presumed to be autobiographical, she then disguises the authenticity of the ‘I’ throughout, as with this example of twins from ‘Dear No. 24601’:

I forget which one I am
Sometimes I wake up believing I am her[.]

There is also evidence of female identity being given voice amidst trauma, like the women in the short poem, ‘Untitled’, who ‘initiate the flames into their small routines’. In the free verse poem ‘Healers’, one of only three double-page pieces, church scaffolding is imagined as female and declared ‘fundamentally insecure’, before she chooses to collapse and make an ‘unbearable sound’.

However, these structured poems feel adrift of contextual detail, albeit deliberately so, requiring the reader to engage with the impersonality they offer. Arguably this limits the connection that can be made with individual pieces, but it doesn’t diminish the overall art of the interrogation.

Collins is confident in her scope and thematic approach yet keeps any answer to the question in the title elusive throughout, opting instead to reveal issues then render them in ever changing registers and voices. By the end, I was readily questioning how society, politics and history influence the way women’s literature is perceived, yet I could also speculate that a longer format afforded by essaying may perhaps give a more satisfying depth to the inquiry. Regardless, just as I remember first hearing the term ‘Mary Sue’, I now pinpoint Collin’s work as a catalyst for thinking more analytically about the restrictions that term places on female creativity.