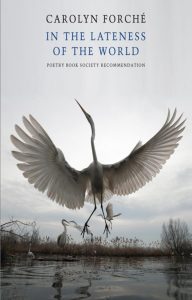 In The Lateness of the World is the fourth collection from Carolyn Forché, coiner of the phrase ‘poetry of witness’. Seventeen years on from her last collection, Blue Hour, Forché continues to bear witness with her poems, which here serve as war correspondence, warnings and eulogies, to both individuals and the world around us.

Intertextuality and a search for connection with other poets is a key theme of the collection. The title is a line from American poet Robert Duncan’s ‘Poetry, a Natural Thing’. Like Duncan, Forché laces her poetry with rich imagery of the natural world, for example in ‘Travel Papers’:

Mountains before and behind,
heather and lichen, yarrow, gorse,
then a sea village of chartreuse fronds.

However, this is a natural world that is disappearing:

Duncan asserts that: ‘Neither our vices nor our virtues/further the poem’, and that poetry is not a conscious endeavour, but rather ‘The poem/feeds upon thought, feeling, impulse’ in order to ‘breed itself’.  Forché’s poetry, meanwhile, seems inspired by a desire to document the truth, and call the reader to action. The ‘lateness of the world’ takes on a darker meaning, as if Forché is driven to write by a sense that the world out of time, or already dead, and she is mourning the ‘late’ world. ‘Travel Papers’ specifically is concerned with the impact of war, both on the natural world and the resulting loss of human life:

The year before you died, America
went to war again on the other
side of the world.
This is how the earth becomes,
you said, a grotto of skeletons.

The title ‘Travel Papers’ implies division – with papers being required to cross from one territory to another – but boundaries are continuously blurred throughout the collection. With the use of ‘you’ in the line above, Forché merges the personal and the political. Similarly, a list at the back of the book reveals sixteen of the poems are dedicated to someone, several in memory. The sense of grief and loss that permeates the collection becomes intensely personal. It retains at the same time its political bite, as Forché turns her mastery of evocative imagery to the task of exposing to the reader the horrors of war, not at a distance but at an immediate, human scale. For example, in ‘The Ghost of Heaven’, the poet recalls with reluctance the discovery of a young woman’s corpse:

The girl was found (don’t say this)
with a man’s severed head stuffed
into her where her child would have been.

Throughout the collection we migrate not only across the world, but across time, between the worlds of the living and the dead, for example in ‘Souffrance’:

I would have put your gloves and umbrella in the coffin,

Along with one more morning in Berlin with Tanya, an hour

In the aftermath, you are emulsion on paper, a corpse listening beneath
The ground to a train passing through a polaroid of clouds.

So more boundaries are dissolved. When coupled with the intertextual nature of the text, with Forché calling on other poets like Duncan and the ancient Greek Archilocus in ‘Theologos’, a sense emerges of a great drawing in. Forché uses poetry to gather these different people and conflicting concepts, to gather everything, towards a single moment described in ‘Toward the End’ where we ‘see/everything at once’ and the reader, perhaps the whole world, can ‘be one person’.

The result is a compelling call to action. Forché invites us to witness with her this vision of the past and future of the world, a world of art and poetry, but also burned and ruined by conflict, a ‘grotto of skeletons’. She challenges us to go out into this world, not dispassionately but emotionally engaged, and change it: ‘The newness of the car determines our distance from the world […] on foot then. Go on foot’.