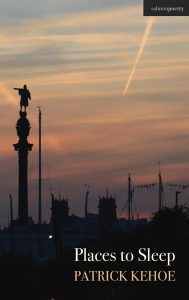 Patrick Kehoe used to live in Spain, but this poetry collection has more to offer than beautiful descriptions of its cities. In three sections, he explores his experiences of the past and the meaning of memory. Some of the poems praise the golden Spanish cities and lament the absence of shade; others, such as ‘The Hussar Revisits the Garrison’, focus on the impermanence of the present:

You lived here once,
Better you lived here still
Even in poor circumstances,
For as soon as you became
The visitor, this proud city
Turned to dust.

Whether the passage of time and the death of the hussar led to the decay of the city or whether the poet describes the fading of memory after his visit, the first section of Places to Sleep contrasts the liveliness of mundane Spain with the dusty ruins of historic cities. Street names and tourist guides are but a reflection of the country’s past; the cities are kept alive by the local people with their bars and guitar music. In ‘La Coruña: A Sequence’, the third part of the poem ends with the description of a waitress in the Galician city.

The flour print of her hand
On that apron forever.

The image of an eternal moment in time and then, a sudden full stop.

Every stanza and every poem in this collection ends with a pause. This structure might appear very simplistic, but the enjambments and end-stopped lines support the effects of the poetic language – the abstract impressions of Spain in the 1970s come alive, more often than not. A few poems are largely concerned with one particular place or area and last lines like ‘Who remembers Calle Aribau.’ (‘À La Porte du Printemps’) might lose their effect if one has no memory of the respective street.

Most poems do, however, create a surreal sense of space and time. The second section of Places to Sleep holds poetry that is even more self-conscious. Images of cities are associated with mirages, and memory itself turns out to be elusive. In ‘The Waterfall of the Streets’, the poets admits:

These poems of which I dream
Would be more real,
But they will never be
In the wakened world.

There is a balance of poems in which the free verse suggests ideas about memory and poetry and where the emphasis seems to lie on the experience of a specific place. The use of Spanish words (hispanismos), and a few translations in Spanish and French make the poems more palpable. ‘Places to Sleep’ is also the name of two poems published in the collection. They describe the Spanish sense of time and memories of a return to this place to sleep: home.

More place names are mentioned as Patrick Kehoe turns to his own experiences in the third section of his newest poetry collection. Taking a break from the calles and carrers (Spanish and Catalan for ‘streets’), ‘he [is] asleep upstairs in a room / At the centre of the web.’ (‘Near Príncipe de Asturias’). The poems are still rich in beautiful imagery, with Spain and the poet oscillating between the present and the past. Yet compared to many thought-inspiring poems in the first sections of the collection, the last part sometimes loses itself in the abstractions of recollected memory.

Overall, Places to Sleep paints an evocative, wondrous and thought-provoking portrait of Spain. Even though his memories might not always depict the country as it was or is, this Irishman’s recreation of Catalonia, La Coruña and Bilbao is definitely worth a visit.

In the wall of a Spanish city
Gold brick of the songs
And the prow of the building
As it rounds the top of the street,
The gold bar of memory.