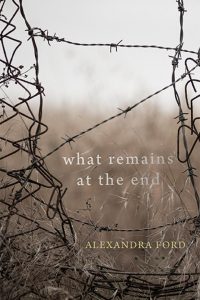 Alexandra Ford’s debut novel, What Remains at the End? is a fearless attempt to convey the atrocities suffered by Danube Swabians in 1940s Yugoslavia at the hands of Tito’s Partisan regime. Many of this German-speaking ethnic minority fled, seeking refuge as far as America; of those who stayed, tens of thousands died, either perishing in labour camps through starvation or brutal murder. Ford offers us tales of genocide and atrocities of war that are difficult to read, and were presumably painful to write.

The main narrative centres on Marie Kohler as she comes to terms with her grandmother’s dementia and the loss of her grandfather. Marie’s sorrow coincides with the failure of her marriage to Sid to whom she no longer feels connected. Having embarked on an affair with the enigmatic David, Marie’s future is uncertain as she questions her identity. After her grandfather’s death, she discovers that her Danube Swabian grandparents had been forced to flee war-time Yugoslavia and seek refuge in America, where they remained, dispersed from family and their ravished homeland. Shocked and intrigued by these revelations, Marie decides to piece together her grandparents’ history in order to understand their plight and her own heritage. David and Marie travel to Europe to visit her grandparents’ former country, now contemporary Serbia, curious to learn more of her family’s unspoken past.

The protagonist’s tragic and troubled family history would have been enough to engage the reader but Ford boldly interweaves Marie’s story with accounts of Tito’s victims, giving context and depth to the history that unravels throughout her journey. The alternating narrative provides contrast between present and past, the living and dead, hope and hopelessness; the traumatic experience of reading wartime Yugoslavia is relieved by Marie’s present-day preoccupations of identity and love. Ford recounts children forced into horrific labour conditions: a stolen boy offered to Partisans by a couple desperately trying to spare their own son; a young girl disfigured for life by a soldier’s brutality. Families were tortured; homes burned; loved ones brutally massacred. Ford’s candour is striking and resonates long after the book is finished:

When I was eleven, I ate lice off the dead girl next to me. Louse exoskeletons cracked between my teeth and her stale blood spread over my tongue.

Marie is haunted by the atrocities she uncovers on her journey through Serbia. The ruins of forgotten labour camps, neglected cemeteries and empty war-torn towns impact her significantly as horrors integrate from past into present—a simple radio crackling sounds to her ‘like dry throats choking on mud’. The revelations of historical evils too shocking to cast aside.

It is difficult to comprehend how Ford felt as she wrote these words yet the writer insists that these are stories that must be told ‘because they show us the world and teach us who we are’. Among unspoken truths of war, there is more than comprehensible human failing, misunderstanding and prejudice. What Remains at the End? addresses a subject far more sinister—the human capacity for evil―and this is where Ford’s novel breaks barriers. With bold and courageous commitment to conveying unthinkable evil from piles of bodies to burning dogs to children burying their own naked fathers, this is an assertive debut that offers more than the complexities of human identity and relationship struggles. Through Marie, Ford reveals how suffering and displacement seeps through into subsequent generations:

Ships and planes might have brought Swabian refugees to America, but chains would hold them to the streets lined with walnut trees and to the bodies left behind.

As I would be followed and bound by my shadows.

What Remains at the End?  explores individual and communal identity in both war and peace time, confirming an inextricable link to the history of our families, countries and ethnicity. Yet, it’s the terrifying tales of persecution punctuating the narrative that remains with the reader.