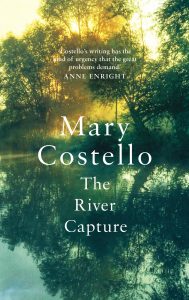 When someone loves only one piece of literature throughout their lifetime, should that devotion be admired or pitied? Acclaimed Irish writer Mary Costello’s second novel, The River Capture, offers a deeply philosophical contemplation of humanity rendered through the mind of a James Joyce obsessive. It is also an ambitious act of dedication to Joyce’s Ulysses, filled with echoes and pointers throughout.

In his mid-thirties, ex-teacher Luke O’Brien returns to a family farm on the banks of the River Sullane in Dublin, having suffered a ‘progressive erosion of the spirit, a steady depletion of reserves’ following the losses of his mother, a relationship broken by miscarriage, and a beloved aunt. He lives in self-imposed solitude, his life unhappy and stalled, much like his plans to write a book on Ulysses—‘the non-existent, impossible book’. Days are only punctuated by visits to his remaining aunt, Ellen.

Costello’s use of free indirect discourse slowly reveals Luke’s gentle nature through his multifarious streams of consciousness, gifting the reader sufficient space to piece together thematic preoccupations with family history and ‘Leopold Bloom’ (a character in Joyce’s novel), and Luke’s progressive views on gender and sexuality:

He is convinced the evolutionary pressure is increasing and change is imminent, and he finds the idea of such change philosophically and aesthetically pleasing.

A woman, Ruth Mulvey, unexpectedly enters his life and brings some needed buoyancy to the book. Luke’s thoughts lighten and Costello encapsulates the joyful immediacy of a new relationship in a sequence of exclamation-laden emails between the lovers:

I love writing to you! I want to write to you all day! Today I made a To Do list. Item No. 1: Ulysses with Ruth. We’ll start this weekend – I cannot wait!

The writing accelerates again when their fledgling relationship is cast into turmoil by a family secret from the past, marking a stylistic change as meandering consciousness gives way to page-turner storytelling from Aunt Ellen. This feels like a reward after the long build-up, and Luke’s desperate interjections push the dialogue forward faster:

Yet the most significant change comes after Ellen’s revelations, when the momentum of the story is deliberately interrupted and never resumes. Costello adopts a question-and-answer interrogation style similar to the Ithaca episode of Ulysses:

What does the sight of Ulysses, or the mere thought of it, always provoke in him?
Evocations of home. Metaphorical home, repose of the soul. A longing for Bloom,
for filial love, fellow feeling.
[…]
As the anger abates, what happens?
Tears fall.

This slows the narrative pace to a standstill, emphasising Luke’s shock as his life is cast adrift again. He becomes increasingly subsumed by the parallels between himself and Joyce’s Leopold Bloom:  ‘in certain moments, in the height of his own flights, Luke could swear Bloom is his brother from another mother’. The narrator informs us that this vulnerability grows into erratic behaviours ‘perilously close to the deranging altitudes to which manias ascend’.

It is the diversion from plot which gives body to the metaphor at the heart of the book―‘the geographical phenomenon that is the river capture’―explained as one flow of water being ‘usurped’ by another until ‘the two become one’. Costello achieves this in both plot and structure; Luke’s life is sadly overtaken by events larger than he is, and the previous shape of the book lost to the unending imitation of Ulysses.

The novel becomes an exhibition space for writer’s craft and is best enjoyed as such. Costello weaves together plot and form, new writing and scholarly deference. Luke’s devotion to Joyce is portrayed as held within a fragile mind yet the restorative joy this connection brings is beautifully depicted. His literary fanaticism is neither overtly admired nor pitied, but instead delicately considered within his own boundaries of fiction, leaving a lasting memory of the vulnerable and loving character of Luke.