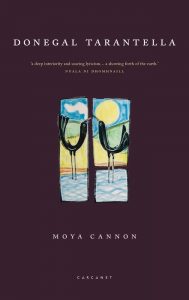 Donegal Tarantella is Irish poet Moya Cannon’s sixth collection of poetry. In proper Cannon style, this assemblage of poetry incorporates a raw, lyrical cadence in the appreciation of landscape and history to deliver a melody of words finely tuned for the page.

Cannon’s poetry is a slow burn of rich imagery and poetic diction, creating an alluvial flow of words; there is also something to be said about the simplicity of the collection. The lines are honest and straightforward, marking it an easy read for those who might be new to Cannon’s atmospheric work, or just beginning to dabble into poetry. There is a presence to these poems—a voice behind the words—so moving and thought-provoking, I was brought to tears on several occasions.

Cannon’s narration in Donegal Tarantella creates an intimacy with the reader. In ‘Mal’ta Boy, 22,000 BC’ the narrator goes from describing an excavation site in Siberia in the first stanza and shifting in the second stanza to speak directly to the human remains found. The narrator goes to ask a series of questions to the boy so long gone from the earth:

Fallen sparrow,
improbable little kinsmen,
buried with a baby sibling,
what are the filaments
that join us?
Did you pull flowers
when the snows melted?
Did you run after flapping birds?
Did you die in affliction
or in your sleep?

Most of these questions will never be answered, and as scientists pore over this ancient child and the ones to be discovered after him, plucking data in a cold white room, we will remember the final aching lines:

What did you call your mother?
For how many moons
did she weep?

The clarity of the words needs no complex bolster to back them up. Instead, these simple statements of Cannon’s make this collection stand out.

Which brings to mind ‘Bread.’ It is perhaps the one poem to get lost among the Irish cliffs, swooping birds, and bygone locations mentioned so readily in Donegal Tarantella. I found it to be one of the most poignant pieces of the collection because, in  responding to the outside world, Cannon brings in a small delicate portion of the inside—a quiet moment of personal reflection.

Soon high crusts will gild,
three loaves will be tapped
from their tins,
an aroma will flow
through keyholes,
will slip
over chipped saddle-boards[…]

The alliteration of the ‘t’ sound is subtle and evokes a fluid rhythm. Words seem to glide down the page like the steam seeping out of the golden crust, into nooks and crannies of the familiar. Smell and taste are senses of nostalgia, offering a little piece of home amongst the land and sea dominating most of the collection. ‘Bread’ is a poem to remind us of the here and now—what may seem as small and irrelevant procedures of the mundane can be the most extraordinary.

However, the collection’s namesake poem, ‘Donegal Tarantella,’ is a tuning pit of sound and movement of the outside:

in the kitchens of south Donegal –
mazurkas, germans, highlands, hornpipes, jigs, reels,
all gone native since they were washed in
by waves of returning emigrants[…]

Cannon’s lyrical style of writing laves the poem with the push and pull against the old and modern world, a backtracking to the origins of ‘Napoleonic garrisons, / traveling pipers or fiddling tinsmiths.’

Donegal Tarantella is by large, a story unfolding the past and the present to produce an image, or glimpse, into the future—life, death, family, and the ebb and flow of the landscape. This linkage of time constructs a kind of hum. A piercing violin, the low timbre of a cello—a tuning of instruments to create something akin to a musical symphony performing on a geological stage.