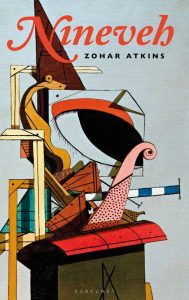 Nineveh is an astounding debut collection full of originality and adding to the vast and rich culture of Jewish poetry. It uses the stylistic device of hyperbole to disclose some of our self-destructive habits in the age of media.  The author borrows, rethinks and comments on many of the literary greats before; Yehuda Halevi, Paul Celan, Leonard Cohen, and Yehuda Amichai just to name a few.

The book is focused mainly on religion, and more precisely on Judaism. The collection begins with the poem ‘Protest’, which gives the reader a good idea of what to look forward to in its exploration of  the  collections’ key themes: the Ancient reimagined, the madness of humanity, and the surreal reality we live in:

No sooner do I say
‘Let there be light’
Then a horde of angels arrives with their signs.

‘No more oppression of darkness!’
‘Stop occupying our empty wild.’
‘Down with the visible!’
‘God Should Know Better Than to Speak.’

The relevance of religion is considered thoughtfully: the role it bears, and how it should and has been adapted. Shades of Jewish culture permeates Atkins’ work—even Yiddish influences can be found, especially in the poem ‘The Oy of the Poem: 28 Exercises in non-Mastery’. Biblical figures are adapted to face modern issues, for example, with God perplexed while binge watching TV. It’s safe to say Atkins doesn’t shy away from what could be seen as controversial.

Atkins’ poems are filled with multiple layers, deep thought and nuance. Nonetheless, uncertainty lies in many of the poems as the poet presents his thoughts in what, at times, appear as unpolished and raw. In the poem ‘Dear Guru’ it feels like the reader gets to see into the thought process of the author: ‘you who are beyond subject / and let’s not kid ourselves, object / you who are the whoopy cushion of all metaphors’. He keeps the readers’ interest with the anticipation created through enjambed sentences that are straddle stanzas as in the poem ‘Letting Nothing Wait’:

your hands perform their necessary
crunching while your mind runs

critical calculation. I talk to myself
about writing poetry.

There are references to pop -culture and multimedia, depicting the absurdity of our modern ways and doings:

Click here for 6 props
Buzzfeed is a distraction
from the Buzzfeed of such.

With interpretation of old texts, Atkins adds to the discussion, and shows that nothing is absolute; everything is malleable, adaptable to our times. The poem ‘Two Great Lights’ is an exemplary piece, with a rendition of the famous story of king Solomon:

In real life, however, the real mother was the false one. She knew the famous tale of Solomon.

Atkins’ knowledge of rabbinic literature is impeccable and this allows him to incorporate and mix them up, inhabiting ancient texts in his modern writing. In addition to being a rabbi, a theologian and the founder of Etz Hasadeh, he is also an accomplished poet and the winner of the Eric-Gregory Award and the combination makes for highly intertextual writing.  A modern-day adaptation on one of Whitman’s most well-read poems, ‘Song of Myself’ is inventive and exuberant:

I am my own listserve,
advertising job and fellowship opportunities
for myself by myself to myself.

I sing of unpaid internships to my soul, O soul,
and of passing controversies on which to take sides
is to take the side of the self.

Overall, the collection is imaginative, full of ancient wisdoms and modern truths sometimes rendered in witty and profound revelations. Atkins’ name will surely echo among poetry lovers for a long time to come; Nineveh is a book to own.