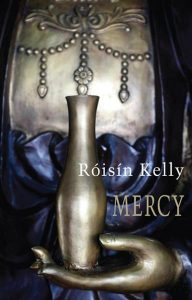 Guide the small boat of my body back to my self.
Tell me which path brings me home.
(‘Mercy’)

Róisín Kelly’s first full collection (her chapbook, Rapture, was published in 2016, by Southword Editions) explores that very potent Irish Roman Catholicism with its personal and political resonances, and weighs it up against the island’s older, but still deeply seeping pagan traditions. Neither is easy to escape (should the writer wish to do so), nor are their long-conjoined promises easy to disentangle. In West Belfast,

I was born on the Falls Road, near a mural of Bobby Sands.
(‘Amongst Women’)

where, so perfectly, there are ‘stars going off like tiny bombs’. Perhaps surprisingly, this mention of The Troubles arrives very late in the collection, and the poet’s search for sources really cranks up with her early move to rural Leitrim.  I suspect it must be very irritating to be a poet from Northern Ireland to have hear that expectation voiced so often, but this poem detonates so brilliantly, and in a series well-skilled at punching politically, that I really did want more. The Famine is regularly referenced, as is the dreadful dereliction of successive British Governments. Tuam’s half-exhumed hell of buried infant truths sits squarely and fairly beside the Killing Fields of the Khmer Rouge. However, the truths Kelly examines are less often found in her experience of Belfast’s turbulence, but in a good number of other countries. Perhaps there is an understandably great need to escape those streets. Nonetheless, in Portugal ‘In her lap, a cat sleeps like a gun’ (‘Mar-a-Lago’), and it’s hard not to hear echoes of Heaney.

The poet travels widely to find herself and unravel spiritual mysteries. From the epigraph in Greek, with a phonetic transliteration and translation, there is a very direct connection made with non-Celtic mythologies, and an exploration of the cosmos and water. From the drenching nature of Ireland’s own watery heritage to the skies, there is a real sense of working back to source and returning these enduring spirits to their birthplaces. Looking to the heavens, the constellations are regularly given much agency, and often a gloriously charged one:

Orion straddles the black row of pines
(‘In America’)

we find that need to bring the deity back to a homeland.

Wherever Kelly writes of a perfect place, however polytheistic, however sensuous the imagery, we are likely to notice the Biblical, especially Eden, where we ‘cup apples like memories’ (‘Leave’). Catholicism does not relinquish its grasp so easily no matter how the writer voyages.

These are expansive poems, rich in pictures and space, frequently evocative of places the reader might also hold dear ‘like a jam of clotted green memories’ (‘Mar-a-Lago’). Kelly has a very admirable way with tercets and couplets, which can contain narratives which might otherwise ramble. Her delicate patterning of rhyme, controlling carefully the full and the half, offers a shape and texture to these poems which makes reading, and re-reading, a great joy. The poet is adept at observing the small glimpses between people, the exchanges so often overlooked, re-examining them as the fulcrums they may really be. Her similes have a love of the fragmented ‘like rose petals torn up and scattered’ (‘Paris, 13th November 2015’). That phrase speaks of blood, but we hear Burns there too. Sometimes their poetic language and pacing seemed to me to ask for trimming, but then would suddenly turn on a remarkable final line or couplet. Consider ‘the careless unscrewing of the moon’ in that same poem, which outruns everything preceding. Somehow those last lines often run counter to the poems, here wonderfully, but other places perhaps losing confidence and over-explaining a hitherto fine poem.

I suspect Mercy will be particularly loved by those intent on parallel explorations. Others may wonder how powerfully she will write a decade hence, alas when life has done its work.  An engaging journey, well worth taking.