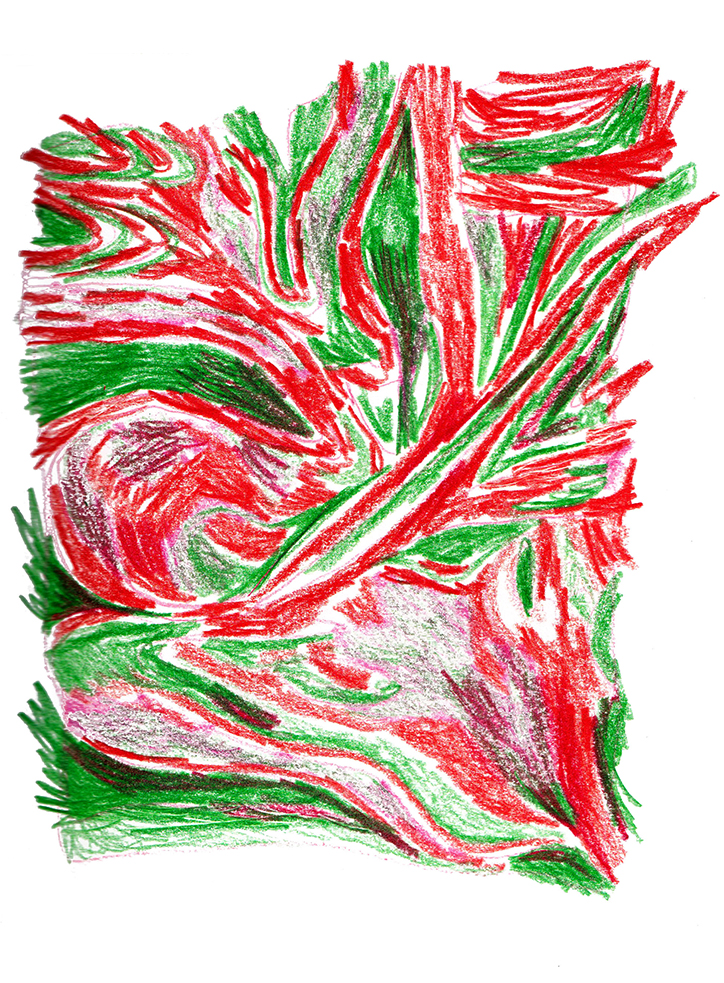 We moved tae Usan when the factory shut and Faither got a joab on the boats. He’d be up at the crack o dawn and awa oot come hell or high tide. When the sea wis rough and spewin its froth on the beach, me and Maggie’d sit at the windae an wonder if the heavin beast had swallied that trawler, but he aiways came back and if there wis a guid catch the skipper’d gie him a bit Salmon.

Me and Maggie would pick the leaves fae the rosemary bush that grew at the back door and Mither would use them tae flavour the pink flesh. Salmon wis a rare treat and We’d be telt tae “Stick in till ye stick oot”.

I mind it wis een o they still days in the summer, when the sea wis thoan oily way and the heat made us feel lazy; Maggie refused tae finish what wis on her plate. Mither and Faither got thrawn and sent her tae her bed withoot any supper – a jeelie piece and a cup o milk tae see us through till mornin – but she ran oot the hoose, Mither roarin after her that she’d get a dirl in the lug when she came back. I watched her run awa doon the track tae the beach, her lang red hair streamin ahent her; it looked like she wis on fire. I dinnae ken what got intae her thoan night.

I wis feart no tae clean ma plate, and because I’d done ma chores I got oot tae play. I thocht she’d be hidin under the auld row boat on the beach but she wisnae there. I sat waitin for her, throwin chuckies into the waves that were creepin closer as the tide came in, but there wis nae sign. I started tae worry then. We had tae be back in the hoose after the turn o the tide.

As I made my way up the path I looked across the fields towards Scurdie Ness, the big lighthouse like a giant finger pokin at the orangey-red sky. It didnae take long tae cross the fields tae get there, but we werenae allowed tae, especially the field with the craggy hill wi the crumblin bothy that sat on the top like a rotten tooth.

Mither an faither said the field covered the Blue Hole, guarded by the ghost of the auld hermit. They said it wis full o steens that he’d dig up, load intae a barra and sell them at the Mert on a Saturday. He’d hunker doon by the side o the road, in an auld jute smock, tied at the waist wi a bit of auld fishin rope, feet bound wi dockie leaves and bits of auld sack. When he saw fowk comin he’d sing “bonnie steens, bonnie steens, bonnier than bairns’ een.”

Mither said that bairns would climb the hill, chap his door and run awa, until a wee laddie, Angus Black, didnae run quick enough. She said the auld hermit caught him and trapped him in the blue hole. The villagers went lookin for the wee loon but never fund him. They tried tae smoke the auld hermit oot but he just disappeared intae thin air.

Things were never the same after Maggie disappeared. Mither and Faither would molluch aboot the fields shoutin fir Maggie, but she never answered, and they were never the same again. I moved back tae the toon when I wis auld enough tae get a joab, and worked in the jewellers for years.

A few years ago, a farmer near lost his plough in that very field when it caved in. Fowlk went doon tae hae a look and, richt enough, there wis a cave full o bony blue and red agate, it wis on the news. At high tide the hole fills up and the sea wishes away anythin in there that shouldnae be. There never wis a hermit that could disappear intae thin air, jist an auld cratur tryin tae feed himself the same as the rest of us. I’ve never stopped missin Maggie, and I often wonder what she’d look like had she lived, although, if she’d still been here, I’ll bet her hair’d be gleamin like sil’er.