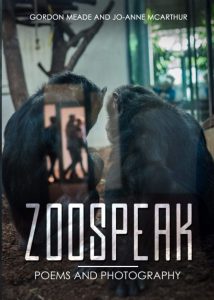 Scottish poet Gordon Meade releases his tenth collection of poetry with an approach towards awareness. He forms lines to accompany the stills taken by Canadian photographer Jo-Anne McArthur. The photos are a peek into another point of view, and Meade puts a face—and a name—to the images, breathing life into a moment captured in time.

The titling in this collection is not done blithely. Zoospeak is a conversation about the language of the zoo, an intermission to stop and ponder the reality of the controversies surrounding these menageries. The collection of poetry speaks volumes for those who are willing to look beneath the surface as the author titles each poem in the same manner that a zoo labels each inhabitant: species, location, and date.

As I read the four sections in Zoospeak, I found myself examining each line, each complementing photograph in detail. Clever in the way he unfolds his poems, Meade manages to use repetition in ways that avoid becoming tedious. I found the echoing lines created a haunting cadence as each stanza expands, filling in a new link towards a deeper truth—the animal’s truth.

In the poem, ‘MataMata Turtle, Thailand, 2008,’ a turtle tries to camouflage in a pool of clear water. The poem is the turtle’s plight: 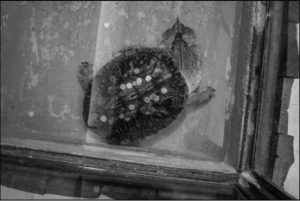 I am trying to hide
at the bottom of a pool of water
but the water is clear
so that the people can see.

Loose change from wish-makers cover both the turtle’s shell and the small space of pool flooring. The image is a reflection of the human desire—not the creature’s. Each stanza ends with a period. A pause. Letting readers soak in the words before the poet adds another powerful line to push the poem even further. Meade ends the poem with the turtle observing the people as they leave with their newly made wishes, ‘with none of them for me’, which emphasises again the separation between humans and animals. 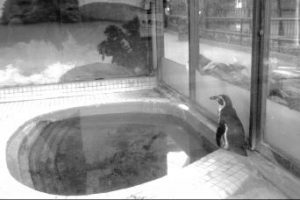 The core of this collection is echoed in two lines from ‘Humboldt Penguin, Thailand, 2009’ as a lonely penguin’s only company is its single reflection. The penguin says, ‘What was once, is now no longer; / what remains, no more than what it is’. The life of a zoo animal is a life that once was and a life that is now. A blurring of the lines occurs between freedom and captivity until ‘What was once, is now no longer’.

One of us is gazing at the crowds,
another is turning to face the wall,
while the last of us is little more than a blur,
pacing back and forth behind bars.

Zoochosis is captured here in a single black and white photograph while Meade describes the condition of these leopards in such simple words: a description and little more. Nor does there need to be more to get the point across: the animals are losing their souls.

Yet, ‘Washed-up Calf Corpse, Israel, 2018’ is the only poem about an animal not in a cage. The calf is dead. The poem, the collection, ends with three weighty lines:

Now, I am unrecognizable as what I was.
Now, I am nothing more than a visual image
of what, because of you, I have become.

The tone is accusing, blaming us, humans, for what these animals are becoming. Metal Bars. Cement walls. Plastic trees. Carcasses forgotten.