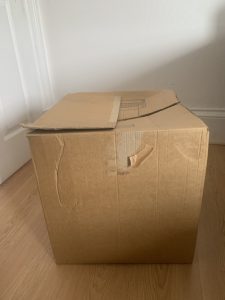 I have a box of memories. It’s a square brown box – one of those used for moving to a new house, ‘memories’ scrawled on one side in black ink. For years it moved with me and my partner from flat to flat, accumulating a little more in weight each year as we collected little notes, Valentine’s Day cards, gig tickets, plane tickets and anything else that reminds a couple of a shared life. When my now ex-partner and I split up and moved into separate flats, she couldn’t face living with the box and what it signified. Things that once were part of our shared experience, each one a scrap of happiness, had overnight deadened into souvenirs.

We weren’t married but it feels like I won the box in the divorce settlement and now have a responsibility to keep it safe. So it sits in a box’s natural habitat in the shade, out of sight, hidden behind the sofa – unopened and undealt with after a year of living alone. I think of the box as the ‘unpacked’ box, the ‘un’ prefix suggesting, perhaps, something lacking: unopened, uncertain, unfulfilled. But the box is the opposite of unpacked in both senses of the word; its contents are steadfastly unremoved and its individual component parts distinctly unanalysed. An unpacked box would be empty, hollow and by association, meaningless. But this box has meaning, albeit meaning that somehow feels late both after the event and dead. Maybe the box only contains the memory of meaning and I am remembering it in the way we remember the dead. The contents of the box now signify a fading connection. Losing something or someone is often a shock: blunt and crude, but in this instance the loss is a process; the things in the box act as gears in a mechanism; cleansing meaning from memory and leaving the ghostly expurgated memory to purposelessly occupy space inside a cardboard coffin.

Destroying the box is an option but has the feeling of betrayal inked in the small print. It feels like I would be dishonouring my memory of my ex-partner to simply dispose of it, as though her life wasn’t worth anything. I say ‘wasn’t’ because my involvement in her life is now over; I no longer know every detail, no longer have an influence. I don’t know what she does day to day beyond the broad knowledge of her career. The biggest shock and what I imagine to resemble something grief-like is that sudden cut of communication. Daily calls and texts for 8 years reduced to cold and perfunctory messages to tie up loose ends and finally, nothing. Nothing but the box remains of our relationship. Perhaps that’s why the import and complexity of a medium-sized packing box has increased; the dawning realisation: this is all that’s left. To cut this last tethering string, would leave me to drop backwards into the unknown. In Still Life With Oysters and Lemon, Mark Doty wrote of such possessions:

Their history is mute; full of associations with particular people, moments, gestures, emotions, and all those associations unavailable now, nothing left of them but a residue, as it accumulated feeling could dissipate into the air, into a haze of vapor of human presence.

Doty thinks of his loss as being as though a haze of vapour or residue but he seems to feel something physical remains that can still be somehow touched. For me, I sense the loss most noticeably in the sound world. What was once a crystal-clear quality of exchange; the warmth of chatter, the feminine timbre of her voice, the sharing of ideas, those reassuring noises in the house of another – all silenced to deafening background static; wavelength frequencies changed, connection lost. 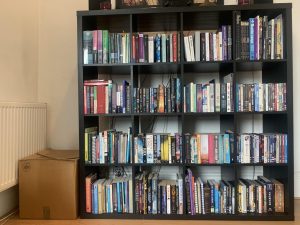 After making the joint decision to split, my ex-partner and I lived in our house for a few months while we looked for separate accommodation. We once loved each other with all the madness of youth, the certainty  of being soulmates. Those last few months of shared living were the hardest of my life. Flickers, imitations of young love would dance briefly, but always hunched; burdened by years and powerless to resist the shadows that lurked, watching, waiting, grown taller. My ex-partner found a flat first and moved out whilst I didn’t have any luck finding a new place. I had to be ready to move quickly so I packed everything non-essential for day-to-day life in boxes, waiting for my new start. By this point the house had no curtains and the neighbours could see in at night time when the lights were switched on, so I built the boxes higher , blocking the view in from outside. Although relieved not to be on show to the outside world, the boxes were now all I could see, they became my city walls; a living room rearranged into a fortified waiting area.

Each stacked box contained something we had shared: my books once sat alongside her books on our bookshelf, my clothes, although exclusively worn by me were selected partly with her taste in mind. As the box-town rose around me, my emotional empire was collapsing. The longer the boxes stood the more I panicked about finding somewhere new to live before the lease termination date. Every day for over a month I came home to a cold, quiet 3-bedroom house; her presence was gone and the displays of our love, our shared existence packed into silent, uniform, soulless pillars of boxes. Alongside the physical problem of finding somewhere to live was the issue of what Doty describes as having a ‘particular identity in the world’. For most of my adult life, decisions were based on the unit of two; I was now fending for myself, leaving the security that exists in the comfort of another. Was the change from being part of a couple to being single a devaluation? What was I worth now that all the hard work I put into being a couple was split into useless halves? Was it a reduction in identity, a lessening of my worth to the world or simply a release from one kind of identity, transitioned to freer, more autonomous self?  The answers to these questions were sealed, perhaps in the boxes that formed the room’s brown towers: impassive yet somehow threatening. Identity re-building couldn’t begin until the things I owned, the boxed building blocks of my new life, were demolished and reconstituted.

Death is the most clotted and dense finality we can conceive of and yet it contains the seed of new life; both in atoms that will recycle and reconfigure and in meaning, which has a chance to revaluate and rematerialise in the face of a stark new reality. Doty deals with the grief of losing a partner: ‘After Wally died, there was something distinctly unbearable to me about the prospect of cleaning it out, of sorting through those boxes.’[1] I haven’t experienced an overwhelming loss in my life as yet; my parents are alive and no friends or partners have died. But I know that as long as I’m around and moving (inevitably perhaps) to somewhere new, boxes will rise up in their looming brown towers, and fall, becoming unpacked somewhere else. People I love will die; the only thing we can truly count on in life is death. So long as I continue to rise and fall in my life so then eventually will I be packing boxes of, not my possessions or memories, but my mother’s or father’s in their newly emptied homes. Whether those boxes will ever be unpacked is something I’m uncertain of; the weight of such boxes may be a burden too heavy deal with. Although yet to experience the kind of grief that Doty speaks of, I share his trepidation; the idea of sorting through my box and its carefully curated happiness is to invite pain. 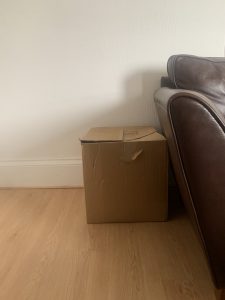 Rebirth contains the residue of past lives; creation cannot occur from a void. My priorities have now changed but they wouldn’t be what they are without my past experiences. The pulse of my relationship flatlined into the straight edge of a flatpack box but it still beats its silent signature inside. It’s hard to tell whether I pulled the plug or faked the death of the relationship. Is my new identity as a single person living alone with new priorities merely identity theft, personality fraud until the box is gone? If the box is providing life support then I am clinging onto an old identity; the hand-written notes contained inside are now forgeries with small print previously unseen tying me to a life contract. The box may be creating a continuing totality, a blocking out of the new light of rebirth that comes with the revelation of finality.

Now the box towers that kept me safe in an empty, unfurnished flat, like a prisoner in solitary confinement, have been demolished, but the source, the essence of what they represent, is still present and their component parts are masquerading as a different form but retaining the same mannequin stare. Maybe finding meaning can only happen when a recognition of the meaningless occurs; to stare fear in the face and realise the temporariness of temporality. Time will degrade cardboard boxes and the contents of them just like it will dredge up and cleanse memories. Time seems most eternal in moments of pain – in the shadows of box towers – but even such a relentless tide cannot rage fierce forever. Perhaps human understanding is packed in boxes?  For sure, the imperfect nature of our existence is suitably unsuitable to try and pack in ideas of order – those spherical planets, crescent brains and fist-sized hearts… Not everything fits together, fits inside. The space between the things that make us real creates an opportunity for them to knock together and so is the damage greater, more harming, perhaps, than the friction of closeness.  Perhaps that’s why boxes are often marked ‘fragile’.

[Ed – Jamie Cameron is a year 3 English and Creative Writing Student. This piece was developed from his end of semester Creative Essay submission.]