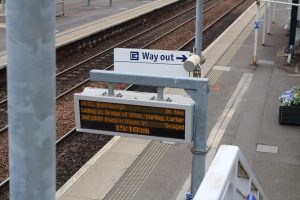 The girl could step off the train, go round by the post office and the pubs, climb the hill and find herself next to the road between two grassy verges. And if she wanted to, she could peel away the layers; from daffodils, to snow, to burnt leaves and watch the video tape rewind. Watch some other girl moving backwards and forwards, backwards and forwards, trailing a cello, a school bag, a friend. Sometimes jogging- she’s late again- sometimes humming or muttering, talking to herself. There’s the soft hiss of the road. The road in rain; a hushed splash. The road on a hot day; the sizzling smell of it.

Past the police station and over the road to the path under the trees where she and her mum used to see a teenage couple walking hand in hand. . . then it had seemed strange to think that she would ever be that old. The trees lifting red hands to the sky, the sky a frosted blue. Geese flying overhead sketching arrows. She walked back and forth, back and forth, from home to school, and school to home and to the high street, or the river, or the train station, then back home again.

Here lies in this bed:
lingering pencil dust,
ground into the mattress,
leaving smudges.
Here lies a little salt;
watered and dried,
and refreshed again
by a clouded eye.
Here lies the sounds
of every still night of
nothing, and the owl,
and a train moving out of sight. 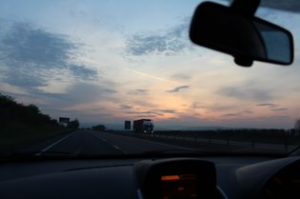 Later than my bed time and it’s strange to be awake in some other world I never get to see. My head is heavy and when I rest it the street-lights seem to tower over me. A row of them, stretching on and on, blurred by the raindrops on the window. The glass is cold as I touch it, cold as I trace the rain-drop race-tracks running down the window. Mum and Dad are talking, and I know the timbre of their voices; soft and low. I roll my head back to watch the street-lights, so tall above me. I’m tucked under Dad’s jacket. I’m warm.

Scree between the stones,
wind grinding gravel to grit
and grit to powder;
soft under the tongues
of the whispering grass.
Grass clinging to the hillside
waving at the dark pools below
and all the red, red landscape,
bruised by heather
whipped by the wind.
Rainfall hammering
the proud mountain head,
breaking apart stone,
turning stones to scree.
Grinding gravel to grit,
wearing down the mountain. 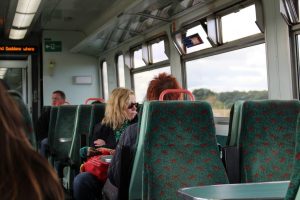 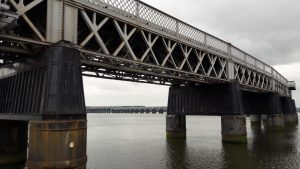 Did you see me walking along the Tay?
Watching the railway bridge, looking for trains,
caught in the blustering howl of the grey,
grey sky and the wind and cold and the rain.
Watching the leathery roll of water,
rippling, by turns silver then blue and black-
watching an old man and his granddaughter,
a pipe in his lips, smoking, smoking fat
smog like a chimney blowing on past her
and her dyed red hair and paint splattered boots…
It was me watching them, listening there
and then, but their words were lost under foot.
Did you see me walking by the city?
I looked back in, but Dundee didn’t know me.

Down by the Overgate, Fast Eddie. Harmonica wielding patron saint, screaming with the seagulls. Is he singing the Proclaimers or the Pogues? Nobody knows. Is it even singing? Of a sort. Fast Eddie yelling among the Mormons and the buggy-pushing mums and the students and the high-schoolers and the shoppers and the buskers. Fast Eddie singing with the buskers. Where does he go when his singing’s done? Where does he come from? Did he push up from underneath a cobble-stone, already fully grown? 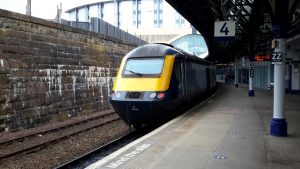 Another train stopped and I watched the parade. The clatter and roll of suitcases, heavy with the smell of different places. Distant places with sunny days or rainy days or sea salt tang, farm houses on hills, left behind but here, now. Two-in-one; get a packet of Maltesers and another half-price. There’s a bit of Australia moving through the station and every part of Scotland just behind. Here and there at once, there and here. This is a kind of out-of-place place and a kind of beyond-time space. Old coal dust lines the brick tunnels, brick cut and worked from the land; the place turned over, heated and cooled in another time. Time to go―time to fly past the gates and on to another place.

[Ed – Mareth Burns is a second year English and Creative Writing Student. These pieces are taken from her creative folio submission.]