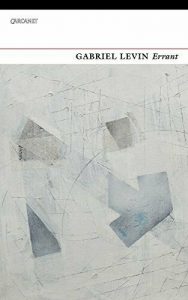 Errant is a fascinating collection that delves into the poet’s past experiences, with influences from other writings and encounters with other creative minds. Gabriel Levin’s sixth collection doesn’t fail to uncover, intrigue and take the reader through a myriad of places journeying between the poet’s homelands in the West and the Middle East. Levin who was born in France but lived all over the world writes in English. His mastery of both Hebrew and French become clear as words from those languages are utilized in the collection.

The book opens and ends with citations of Venus at dawn and Hesperus at dusk, depicting the flow of time. This creates cohesion in the book—a path the reader can easily follow from beginning to end. Errant is not a conventional collection but reaches out and mixes different media, bringing numerous perspectives and forms of art together. As the title suggest, the book is about wandering. Delicately the poet shows his own journey across time and space. His short lines and fragments depict not only the feeling but the contours and textures of the experiences he has gone through. This is especially clear in the poem ‘Snow in C Sharp Minor’, where the writing and treading the paths of memory is layered:

Perhaps I too shall write
a little research in snow
as you did (when was it, ‘75
in NY?), moderately sober in my house
slippers in the east

perhaps I too am a snowed-
upon islet in Jerusalem, snapping out of it[.]

Errant is erudite, adept in its rendering of triads, aubades and lyrics, all of which allude to a mythological, stargazing journey. Levin draws inspiration from Plato’s image of the music of the spheres. Elegies to filmmakers Abbas Kiarostami and Chantal Akerman can be found, but most notably Tamara Rikman’s multimedia works described in the poem ‘What Drew Me On’.

The metaphors and images of travelling across the cosmos are strong and high in detail. The manifestation of colour and the blossoming of a bud in the poem ‘Light Years’ allows Levin to portray change as growth, and ponder about the processes of writing and reading in tangible ways:

Shake press down, watch color appear.
Hadn’t I read in Benjamin how parables bud
into a blossom like the margosa outside your window
or unfold like a paper boat into a flat sheet
of paper, to smooth out and decipher
in the palm of your hand?

It wouldn’t be a long shot to assume the theme touches on the poet’s own experiences and that of the Jewish diaspora. References to Avraham Ibn Ezra, the medieval poet and philosopher that fled Spain in 1140, ‘Wandering from one country to another—Italy, Provence, Northern France, England’, are made throughout the collection. The theme of migrations is also apparent in the first section of the poem, ‘What Drew Me On’, subtitled ’The Vision of Er’. Presumably Levin uses the medieval poet as an allegory for himself and the trope of the “wandering Jew”, presented as wavering and unclear:

Errant is no frothy collection; it is nuanced and rich with knowledge and comments of many relevant and ancient topics, and thoughts. Art and the creation of it, the wandering of the individual and that of the people is only a sliver of what the collection holds. To understand it completely requires previous knowledge, and to decipher it is no easy task. But every reader can find beauty in the elegies and the masterful use of language.